Welcome to the Orthodox Church

Posted on December 3, 2017 by smellincoffee
Welcome to the Orthodox Church
© 2015 Fredrica Mathews-Green
384 pages 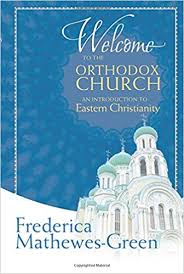 What it means to be liturgical can’t be encapsulated in a creed; liturgy has to be practiced,  experienced.  In Welcome to Orthodoxy,  FMG creates a fictional Orthodox parish and guides readers through it. She begins first with a tour of the church’s physical structure — an outward and visible sign of its theology — before guiding her readers through Vespers, the Divine Liturgy, Pascha, and — the holiest of holies — coffee hour.   FMG isn’t playing tour guide to a fictional landscape, as every step of the way she is sharing the theology and culture of the Orthodox tradition.  Particularly interesting for me is FMG’s statement that the Orthodox regard the Crucifixion differently; for them, Christ died to conquer Death – not to sacrifice himself as atonement for forgiveness of sin.  Kin to this is the Orthodox view of sin, which is regarded as deathly not because sin is like a law that carries the death penalty, but because sin is simply spiritual disease. Anger, lust and so on disrupt the soul’s connection to God, and make people vulnerable to worsened health – -both spiritual and physical. This view is echoed in Stoicism, or at least in the writings of Marcus Aurelius — he urged himself to return to philosophy as a patient to the doctor.   Throughout the book, FMG explains the origin of Orthodox practices that seem strange to ‘modern’ Christians who are largely divorced from history. . Icons, for instance, are viewed as windows into heaven, and when they are kissed it is not the object that is being greeted, but the person who the icon is showing.  I’ve read similar books (The Way, on theology, and FMG’s Facing East, on a year in the Orthodox church), so there weren’t many surprises.  I could see recommending this to someone who was curious about the Orthodox tradition.

Blogger having some technical hiccup, so here are links which would otherwise be in-text:

Citizen, librarian, reader with a boundless wonder for the world and a curiosity about all the beings inside it.
View all posts by smellincoffee →
This entry was posted in Reviews and tagged Christianity, Orthodoxy, religion. Bookmark the permalink.

2 Responses to Welcome to the Orthodox Church