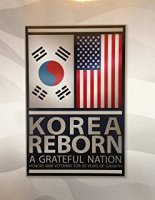 Like most Americans, I have very little knowledge of the Korean War, outside of knowing Douglas MacArthur’s role there.  When this book appeared at the library, published by the Republic of South Korea to honor US veterans of the conflict,  it seemed like a good place to start.  The book is half-history, half-celebration. Its opening chapters chronicle the invasion of Korea by Japan, and the subsequent split of the country after the Soviets  moved in following Japan’s defeat in World War 2.  Kim Il Sung, appointed by the communists to be their client boss in the north, attempted (with permission from his masters) to expand into South Korea. and nearly captured the entire peninsula before UN forces arrived.  The arrival of the US military and other UN allies reversed Kim’s charge,   and were it not for the sudden intervention of the Chinese communists, Kim might have been put out of work altogether before his strange spawn could create a family cult around themselves.  The second half of the book is more celebration than history, but shares how the South Korea economy has become a powerhouse, its democracy better rated than even the UN, and its culture an increasing influence in the west — from K-Pop to Samsung electronics.  A nation which was nearly completely destroyed in war has, through foreign aid and a free economy, become a full participant in the global community — giving aide and sending soldiers to relieve those in distress.

Although the book isn’t a formal or serious history,  I found it helpful in establishing  the basic outline of the war. The latter half is…dare I say, heartwarming, what with all the pictures of bright skyscrapers, happy children, and expressions of friendship between Korea and the United States.

Citizen, librarian, reader with a boundless wonder for the world and a curiosity about all the beings inside it.
View all posts by smellincoffee →
This entry was posted in history, Reviews and tagged 2017 Discovery of Asia, Asia, history, Korea. Bookmark the permalink.