Posted on September 10, 2017 by smellincoffee

Isaac’s Storm: A Man, A Time, and the Deadliest Hurricane in History
© 1999 Erik Larson
336 pages 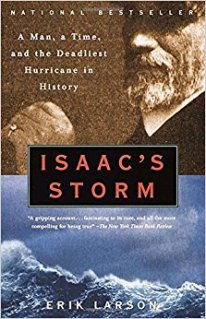 First news from Galveston just received by train that could get no closer to the bay shore than 6 mi  where the prairie was strewn with debris and dead bodies. About 200 corpses counted from the train. Large steamship stranded 2 mi inland. Nothing could be seen of Galveston. Loss of life and property undoubtedly most appalling. Weather clear and bright here with gentle southeast wind.

On September 8th, 1900,  Galveston, Texas lost its bid to become the greatest city in Texas, the New York of the West. It became famous for another reason, however: the near-total destruction of the city and the deaths of at least six thousand of its people made the Galveston hurricane the deadliest to ever strike. It remains the United States’ greatest natural disaster, despite challengers like Katrina and the San Francisco Fire of 1906. Isaac’s Storm renders a history of the disaster, largely through the eyes of a Weather Bureau scientist who failed to predict it — to his own tragedy. A mix of history and science, Isaac’s Storm is narrative history that reminds readers of a more optimistic time — and of the dangers of that optimism.

I first learned of the Galveston hurricane through a novel, strangely enough, a criminal thriller/western set in the city’s seedy underbelly shortly before another hurricane struck the city.  The thought of a metropolis-in-the-making having its life snuffed out has stayed with me ever since, but the storm’s anniversary — coinciding with three hurricanes brewing in the Atlantic — brought the event to mind recently. Isaac’s Storm mixes all kinds of science and history together; Larson doesn’t just stick with Isaac Cline, but in the opening chapters darts hither and yon across the hemispheres to tell stories that contributing to our understanding of tropical storms and hurricanes. Although Isaac Cline was a dedicated and intelligent scientist, he believed (based on studying reports from places like Bengal) that Galveston Bay was inimical to hurricane strikes, that the topography of the Texas coast discourage and dampened them.  Unfortunately for the residents of Galveston, a warning about the hurricane from Cuba was dismissed by American authorities, who regarded the Cubans as excitive and superstitious.  Larson regards the Weather Bureau of 1900 as overly confident in its own abilities to predict the weather with exactitude, despite its able use of a telegraphic warning system that was leaping the oceans.

There were portents during the day that something was in the offing. Although the barometer rose at times and the skies didn’t have the “signature color” that preceded hurricanes (brickdust red, apparently), the rising swells that kept crashing into the beach were unusual. By the time night fell, those swells were ever-larger and wiping out the infrastructure build near the beach — docks, gazebos, even a trolley trestle. Throughout the late afternoon and early evening,  rising water flooded the city, but the full fury didn’t smash into Galveston until after dark.  Perhaps that contributed to the appalling death toll, making it harder for people to navigate through the sudden ruins of their city and avoid danger. A lot of deaths were caused by people being struck by debris, though building collapses were another factor — as were drownings. Isaac and his children managed to escape, but his pregnant wife never emerged from the ruins of their house, nor did the dozens of other people who had taken shelter there.

Although the book is ultimately about a harrowing disaster, as narrative history Isaac’s Storm is easy on the mind, and I appreciated the look into the beginnings of weather services in the United States…even if they weren’t even aware of the Gulf Stream yet. 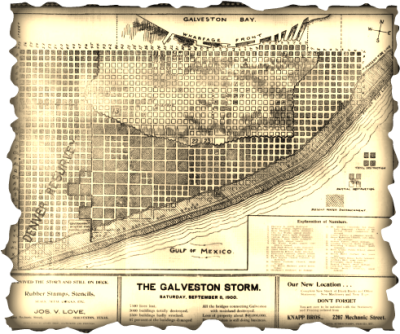 The shaded blocks were destroyed as storm surges swept in from north and south.  Even the few unshaded blocks in the center were heavily damaged, according to Larson. 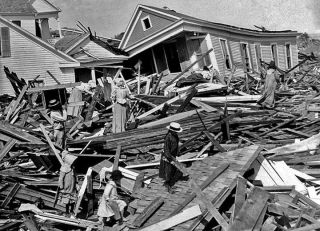 Citizen, librarian, reader with a boundless wonder for the world and a curiosity about all the beings inside it.
View all posts by smellincoffee →
This entry was posted in Reviews, Uncategorized and tagged disaster, history, science, Texas, weather. Bookmark the permalink.