The Gulag Archipelago, Volume I 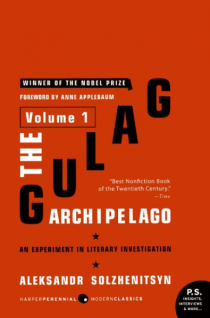 Such was my desire to read The Gulag Archipelago that when I found it on the shelf and observed that it was not one big book, but three big books, I didn’t pause to reconsider.  It’s not just an entry on a list for me; I’ve heard too much about the book and about its author to shy away.   Because it’s a multi-volume work, each collecting several ‘books’, I will be posting about the volumes as I read them, and then attempting a general review at the very end.

Let’s begin with the very obvious. The Gulag Archipelago is vast survey of the Soviet prison state — a state within a state, an internal empire. Its property is not contiguous, but consists of islands of security buildings and camps connected by processing hubs and the roads themselves.  Solzhenitsyn was born the year of the revolution, and became an officer in the Russian army during the “Great Patriotic War”.  Although strongly encouraged to apply for NKVD training, Solzhenitsyn demurred, increasingly uncomfortable with the morality of the state’s actions. His timid research into the means and methods of the gulag system would grant him immediate first-hand evidence, as Solzhenitsyn himself was arrested and subjected to interrogation.

This is not merely a prison memoir. In his opening chapter, Solzhenitsyn renders a complete history of the Gulag system, with every wave of mass arrests chronicled in term. These arrests were not effected simply to purge out heretics to Soviet dogma, or to punish wicked peasants who resisted the seizure of their farms. Whenever the state encountered a problem —  failing infrastructure, ruined crops — it found someone to blame it on.  Quickly given a label — “limiter” for instance, for those who dared to suggest that rail lines only had so much carrying capacity, and that trebling loads would ruin the rails — the traitors would then be dispatched away.  Problem solved! Another brand of  nogoodniks were the “wreckers”, who were responsible every time machinery broke down. Sometimes, the wreckers were responsible even if they did precisely what they were told, like sowing seeds in the snow because Lysenko believed exposed seeds would increased their yield. (They rotted, instead.)

The book’s opening chapters have incredible interest, some of it dark. Solzhenitsyn details all of the various methods of torture and interrogation he and his fellows were exposed to;  the methods were not meant so much to provoke truth as to elicit a confession, as official dogma made truth relative. So long as there was an angle to pursue, a faint argument to make,  a man could be hung with his own words. “Give us the man,” said the state police, “and we’ll make the case.”  Particularly of interest is Solzhenitsyn’s chapter on the “Bluecaps”, the state police themselves, and his thoughts on good and evil.   It would be wonderful, he writes, if there were simply evil people, and we could separate them from the rest of us; but the line between good and evil runs through every human heart, and who among us would cut out his own heart?   This isn’t woolgathering on Solzhenitsyn’s part, as he remembered his own moral compromises just as an officer of the army — his easy arrogance, his thoughtless actions.   Later on in this volume, Solzhenitsyn chronicles the history of show trials and the developing legal codes that would allow official sanction for arresting and executing anyone whom the state saw fit.   In the last part, book two, he follows his own journey to the work camps themselves by writing about the transit camps and the elaborate transportation system; here, as more prisoners are mixed in together, we see spontaneous pecking orders, with the actual criminals (thieves and such) taking the best and sneering at the politicals.  This is quite the change from the Tsarist regime, in which politicals were a minor class of detainee who enjoyed far fewer restrictions than the criminals.  (Of course, the nature of prison-keeping changed from the Tsars:  when Russia was on the eve of evolution, the jailers were regarded with such contempt that gentlemen wouldn’t even shake their hands. After the revolution, jailers were regarded with fear and trembling.)

A third of the way into this epic, I am already beginning to appreciate why Solzhenitsyn’s work is regarded so highly;  the amount of information collected and ordered here is rendered to the reader in a very human voice,  one which recounts all this in sometimes comic, sometimes sad, disbelief.

Citizen, librarian, reader with a boundless wonder for the world and a curiosity about all the beings inside it.
View all posts by smellincoffee →
This entry was posted in Reviews and tagged "classic", Aleksandr Solzhenitsyn, Classics and Literary, Classics Club Challenge, Gulag Archipelago, Man vs State, prisons, Russia, survey. Bookmark the permalink.

6 Responses to The Gulag Archipelago, Volume I