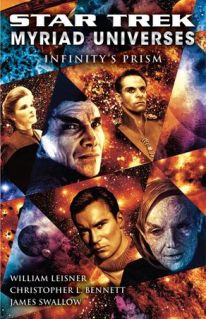 What if….Khan won the Eugenics Wars? What if….Earth had succumbed to fear after the Xindi attack, and withdrawn from the Coalition of Planets and exploring the final frontier? And what if — and this is a big one — what if Harry Kim was promoted to lieutenant?   Such are the stories, the three novellas, comprising ST: Myriad Universes, volume one.   Three Treklit veterans have produced here a collection of stories that have old heroes and villains — Kirk, Dukat, KHAAAAAAAAN! —  playing very different roles. An unexpected discovery for me, I couldn’t stop reading it.

William Leisner’s “A Less Perfect Union” starts us off with an alternate Babel conference,  featuring a xenophobic James Kirk who serves the United Earth ship Enterprise, under the command of an aging Christopher Pike. Although  Earth succumbed to xenophobic politics following the conclusion of the Xindi war, withdrawing from the proto-Federation,  after a century of isolation some on Earth are interested in restoring relations with the Vulcans and Andorians. Unfortunately, their spokesperson — T’Pol, who remembers the hopeful days of Archer’s Enterprise — is   kidnapped by a Romulan impersonating Ambassador Sarek, with the unwitting help of Jim Kirk.  Leiser almost rivals Greg Cox for subtle allusions to parts of the Trek verse, including Trek literature.  This was a strong start to the book, with the hilarious sight of  Doctor McCoy urging Jim not to be so defensively racist about Vulcans.

In Christopher Bennett’s “Places of Exile”, we see a Voyager too shattered by its first encounter with Species 8472 to continue pressing on towards the Alpha Quadrant, choosing instead to temporarily settle among the residents and officers of a space station-based civilization.  Bennett brings his customary science strengths to the table here,  and they serve him and the reader well when he begins exploring fluidic space.  Janeway and Chakotay’s enthuaism for making a home in the Delta Quadrant vary widely: Janeway’s intention of returning to the Federation never wavers, and she is concerned that her crew might lose its identity.  But it is Federation ideals that move Janeway and the other to work with refugees of the Borg-8472 war, creating a nascent coalition that works to find a way, martial or scientific, to end the brewing catastrophe.  Another interesting aspect of this story is the expansion of the Doctor, who becomes a dispersed intelligence controlling medical droids throughout the Coalition’s stations and ships.  Although Bennett kills off Tuvok and Paris, Harry Kim finally gets a love life and a promotion.  (Was it worth it, Harry?)

“Seeds of Dissent”, authored by James Swallow, visits a very different 24th century,  one in which Khan Noonien Singh won the Eugenics Wars and created a human empire nearly engulfing the Alpha Quadrant.  The discovery of an ancient human freighter — the Botany Bay — sparks problems for the Children of Khan, however. The freighter contains the last survivors of unmodified humanity, and their memory banks contain records of the atrocities committed during Khan’s rise to power —  and challenging a history of Khan that sees him personally doing everything from being the first to step foot on Mars to breaking the lightspeed barrier.  Although this story features an amusingly perverse pairing of Kira and Dukat (rebel lovers), it’s mostly a generic rebels vs the Empire story.  The augmented humans aren’t even interesting: they’re big and can survive in space for a few moments, but nothing of their society is revealed beyond a lot of Roman-derived titles.  The ending was a little different than expected, however.

Of the three,  I regard Bennett’s as the strongest. Swallow’s had the most interesting premise, but its development wasn’t nearly as imaginative as it could have been.  This book is first in a trilogy of alt-tales, but the others don’t seem particularly interesting — with one exception, of Soong-type androids becoming pervasive in the Federation. As usual, Bennett posts annotations for his story.

Citizen, librarian, reader with a boundless wonder for the world and a curiosity about all the beings inside it.
View all posts by smellincoffee →
This entry was posted in Reviews and tagged Christopher L. Bennett, Deep Space Nine, ST TOS, ST Voyager, Star Trek. Bookmark the permalink.