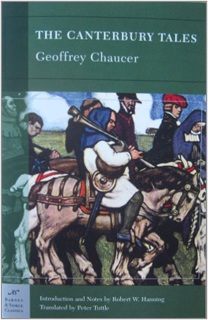 If you’ve ever glanced at my Classics Club list, you’ll see Canterbury Tales sitting there, and I’ve regarded it as one of the tougher ones on my list — in the same tier as the Russians,  April is the ideal month for reading the Tales, in part because it’s set during April (“Whan that Aprille with his shoures soote …”),  but mostly because April is a month I’ve dedicated to England for the past several years.  With its girth in mind, I began early, on March 1st.   (That marked the first day of Lent, and I was amused by the thought of reading about a pilgrimage during a time inspired by pilgrimage.)

I will note from the beginning that I did not read the tales in Chaucer’s original English. My library, happily, has a 900+ page volume that presents a column of Chaucer alongside one of ‘modern’ English, and it was the modern English which I largely read. I often compared the two columns, reading as much as I could of Chaucer before having to take a peek at the meaning of words, and I saw enough to realize — based on the fact that certain words were suppose to rhyme – -that Chaucerian English really did sound much different from ours.

I assume most people are aware of the general premise of The Canterbury Tales, but just in case: a large group of people on pilgrimage to Canterbury (intent on honoring Thomas a Becket) converge on an inn. Since they’re all headed the same way, they decide to engage in a little friendly competition: each person will spin a couple of tales there and back again, and when they all return to the inn they will decide who gave the best story, and all pitch in to give that person a free meal.  Such is the General Prologue,  after which various personalities step forward to give a story. The stories vary in length and in mood, as do the storytellers; some are noblemen, like Knights; others are commoners,  some are women, some are members of religious orders.  Some of the stories are noble, some tragic, some sad, and some very silly.

Rather than reviewing Chaucer (rather like reviewing Homer!), I want to share a couple of general comments and then recap some of the more memorable stories from the first half of the Tales, when I was still taking notes.  I was surprised by the varied settings of the stories; some are set as far afield as Russia, Syria, and Greece. As with The Merrie Adventures of Robin Hood, there are grievances aplenty against the landed nobility, including the church.  Lastly, while I’ve heard much about the medieval cult of courtly love, I never appreciated how fantastically silly medievals were for romance until I read through some of this preposterous goings-on.

And now, recaps of a few more memorable tales, complete with a moral:

Knight’s Tale:  Two cousins imprisoned together fall in love with the same woman, and are violently jealous even though they’re in a tower and there is zero chance of them courting her.    Naturally one escapes and the other is pardoned, and upon pursuing the girl they meet in a field and start fighting. Who should discover them but the king who imprisoned them in the first place, who — persuaded by the girl, who turns out to be his sister — allows them to meet one year hence, with their respective armies, and enter into trial by combat to see who shall win her hand.

The Miller’s Tale:  One woman is pursued by two men while still married to a third. The story involves two occasions of rear ends being kissed by mistake.

The moral: Wait until daylight to kiss people.

The Clerk’s Tale:  A King is pressed by his people to marry and decides to marry a beautiful and virtuous peasant.  Despite her character, wisdom, and beauty, the King is constantly suspicious of her and inflicts a series of Job-like tests upon her which amount to (1) making her believe he’s killed her children,  (2) making her believe he’s going to annul their union and marry someone less controversial, and (3) having her PLAN THE NEW WIFE’S WEDDING.   When the wedding guests arrive, and lo! The “bride” is actually her long-lost daughter, with long-lost son in tow,  everyone enjoys a happily-ever-after moment. (Instead of “What the heck, Dad? moment.)

The moral:   What seems like psychopathic behavior may, in twenty years, turn out to be  a convoluted plan with a happy ending.  So uh, have patience.

The Wife of Bath: After entirely too much information about her five husbands, the Wife of Bath tells the story of a Knight who raped a woman and was brought on trial to the King’s court, whereupon the Queen gave him one year to  solve the question: What do women want?   Having queried high and low to no avail, the Knight resignedly begins returning to the court to meet his death, only to chance upon a horribly disfigured old woman who will give him the answer if he promises to anything she wants.   He gives the answer to the Queen and is promptly confronted by the old woman, who bids him marry her.   He resists by recounting her faults (poverty, age, etc);  she rebuts them by praising poverty, age, etc, and finally he relents to marrying her.  She then asks him:  would he rather she be old and faithful, or young and tempting to others?   He leaves the matter to her, and  she — happy that he has ceded his judgement to hers — decides to become both young and faithful. (Oh,  and the answer to ‘what do women want?’ is ‘to be in charge’.)  Hurrah for…resignation…?

The moral:   Rape is evil, but if you find a witch who wants a husband, you might get away with it.

Citizen, librarian, reader with a boundless wonder for the world and a curiosity about all the beings inside it.
View all posts by smellincoffee →
This entry was posted in Reviews and tagged "classic", Britain, Classics and Literary, Classics Club Challenge, English Literature, Medieval, poetry, short stories. Bookmark the permalink.

9 Responses to The Canterbury Tales