China Road: A Journey into the Future of a Rising Power
© 2007 Rob Gifford
352 pages 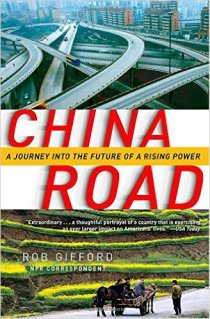 National Road 312 spans the breadth of China, connecting its sparsely settled and scarcely developed rural interior with the port city of Shanghai,  the largest in the world and the proud symbol of Chinese modernity.   Before ending his decades-long period studying and working in China, Rob Gifford decided to take a farewell trip across the country following this Asian ‘Route 66’,   absorbing the stories of China’s tumultuous 20th century through the personal lives of men and women he interviews along the way.  Some interviews were planned in advance, others spontaneous and candid – but all are unique, and indicate to Gifford that now more than ever,  individuals are going to drive the story of China, not Confucian tradition or Communist orthodoxy.  While a travel book, China Road is also a collective memoir of the rough road that Chinese civilization has traveled as it continues trying to find its way.

China endured hell in the 20th century; beginning it in civil war and at the mercy of both Western colonialists and Japanese imperialists, some measure of peace was not to be had until 1949.  The triumphant Communists, however,  were not done waging war, and in the Cultural Revolution they let loose the furies to kill and burn everything not modern and Maoist.  At long last another generation came to power and begin creating some measure of stability, and even liberalization and subsequent economic growth.   China’s constant struggle to find itself is not told through one author’s narrative, but rather through the lives of an array of Chinese citizens:  truck drivers, businessmen, rural villagers,  young urban Party members in search of their next set of high heels; political dissidents in hiding, teenagers on the cusp of going to college,  weary elders who have seen China destroyed several times in their lives;  Tibetans,  Muslim Uighurs, and still more.    Through their lives Gifford reflects on various aspects of China in mid-transformation:     the withdrawal of the Communist party from everything but political power,  the  government’s awe-inspiring attempts to build not just a country, but an entire continent;  the on-going problem with corruption that he attributes to a lack of checks and balances that was present in the Confucian-imperial state as well;  the economic growth that is allowing the majority of Chinese citizens to live better lives, and so on.

Gifford introduces early on a concept he returns to several times: as much as they are controlled politically,  at a deeper level,  China’s people now drift loose. The old moral order was destroyed wholesale by the Communists, who attempted to recreate a new socialist civil culture.  Virtually all of that has been quietly retired, however, aside from admonishments on billboards to keep the poor in mind. So long as people don’t interfere with the party’s political supremacy, they are in turn left alone.  They are left to wrestle with questions of purpose and identity: what does it mean to be Chinese,  when  so much was earlier condemned to the fires, but what replaced it has retreated?  In one of the first chapters set in Shanghai, Gifford encounters two young Party members out shopping,  and both of them confirm that there’s little guidance to them as to what sort of life they should be looking forward to. One exults in the material freedom, but the other seems struck by some malaise of modernity,    directionless and unsatisfied. Later on, a young woman engaged in a self-destructive career struggles to articulate what exactly she’s desiring, and can only conclude — “It’s..difficult being human, isn’t it?”

Although China Road is ten years dated, its human stories  make it engaging reading, and provide  easy exposure to China’s history and future.

Citizen, librarian, reader with a boundless wonder for the world and a curiosity about all the beings inside it.
View all posts by smellincoffee →
This entry was posted in Reviews, Uncategorized and tagged 2017 Discovery of Asia, Asia, China, travel. Bookmark the permalink.