Week of Enchantment: Takin’ that Left Turn at Albuquerque

Ever since I arrived in Albuequerque, I’d be haunted by the constant din of traffic. I entered town in the middle of it, and remained surrounded by it. It never ceased — even at three am in the morning, I’d awake and hear the steady roar of the interstate and Coors Boulevard.   Here in Old Town, though, long before tourists and shopkeepers had arrived, I was free from the storm of steel.

I beelined for the church, of course, it being the largest and most attractive building. Called San Felipes, it was closed for the moment, but early visitors like myself could still wander the courtyard.  After getting my bearings, I noticed the doors being opened and entered.

Sanctuary of San Felipes. Notice statue of Mary on left, posed above an entombed Jesus.

San Felipes later in the day

San Felipes was the only church I visited whose aura hadn’t been trampled under by throngs of fellow tourists, and I enjoyed five minutes of peaceful silence before anyone else came in. They came armed, with cameras, so I took my own shots and departed.  From here I would wander in and out of streets admiring the architecture.  I decided to see if I could find the science museum, but on the way encountered art.

Does that say ‘Christmas Shop’? Yes. Does it refer to red and green chile? No. 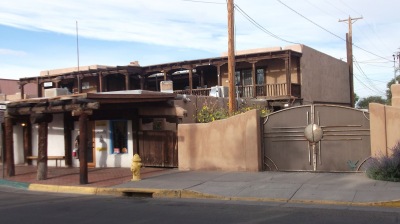 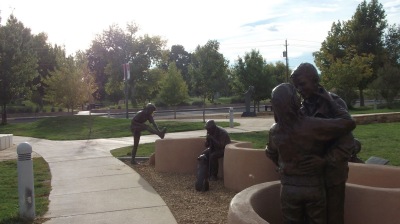 To the left of our intrepid explorers lays the rear of the science museum. Onward!

Citizen, librarian, reader with a boundless wonder for the world and a curiosity about all the beings inside it.
View all posts by smellincoffee →
This entry was posted in General and tagged Albuquerque, New Mexico, TW on the road. Bookmark the permalink.