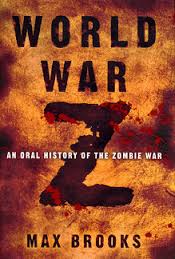 Reading Night of the Living Trekkies put me in the mood for more weird fiction, and World War Z fits the bill!  Fictional, but not a novel, it presents itself as an ‘oral history’ of the great zombie war — one that began as a medical crisis before metastasizing into a global struggle to survive.

The writing is clever;  this isn’t the retelling of an action novel, but a depiction of global society  reeling under the threat and changing to take on new circumstances.  Early on we see nation-states struggling under waves of refugees, the stresses producing conventional warfare. As the epidemic morphs into a war,  we are with the soldiers and generals who realize how poorly suited modern warfare is to fighting the undead.   Zombie hordes have no supply lines to guard, no officers who can be shot,  and no problem replacing fallen comrades: every enemy they kill reanimates to fight for the horde.  Destroying their bodies merely slows them down; death necessitates headshots or decapitations.    The author has a good handle on how diverse the human race is;  the plague has different names throughout the globe, depending on how it was first discovered.  This can lead to tragedy;  one name for it, “African rabies”, lead people to think that rabies  inoculations would keep them safe.

Responses to the threat vary by nation; some survive, some vanish, and some — Cuba, incredibly — thrive.  The author also create some sense of the psychological toll the war is having on people, through the creation of ‘quisling’s, humans who pretend to be zombies. It’s not simply a matter of playing possum; they actively live as the undead, even trying to eat people.  Civilization doesn’t collapse completely; although strategic retreats abandon much of the planet, castles and strongholds provide safer areas where abandoned material can be refashioned into tools for war. The war has a strange combination of modern and medieval;  airplanes are used only for  supplies and recon, and melee combat returns in a big way.  The American infantry’s favored melee weapon is a combination spade and axe, the Lobo.

With characters from across the planet, and a similarly diverse set of pondered topics, World War Z  must be the most intelligent zombie fiction out there!

Citizen, librarian, reader with a boundless wonder for the world and a curiosity about all the beings inside it.
View all posts by smellincoffee →
This entry was posted in Reviews, science fiction and tagged braaaaaains, horror, science fiction. Bookmark the permalink.