Posted on September 13, 2016 by smellincoffee 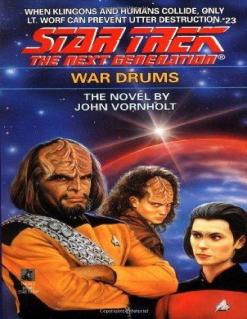 Imagine Lord of the Flies with Klingons, and set the pack of nigh-feral boys against a small community of settlers who only just arrived themselves.  Such is the set up of War Drums, the story of a besieged human colony which solicits the Enterprise’s help. When the people of New Reykjavík broke ground at a stable spot on the strange planet Selva, they didn’t realize it already had residents — a group of Klingon adolescents, marooned as children when their refugee ship crashed here. Now, after months of raids by the Klingons, the humans are lead by a bitter and xenophobic man who prefers the Enterprise’s sensors and phasers to her crew’s diplomatic savvy.   Created by John Vornholt, War Drums is Ro Laren’s first appearance in Treklit, and an interesting predictor of several TNG and DS9 episodes. The main plot — desperate settlers increasingly held in the grips of a fear taking racial overtones, Worf struggling to make contact with the raiders and teach them – -has much human interest, but the obligatory B thread involves imminent geologic catastrophe that is uncovered by Ro and a twelve-year-old colonial girl, Myra.  Truth to be told, I tend to skip through the B-scenes in older Trek books, because they tend to be  engineering problems rendered in complete technobabble. (“The tech is going to go teching tech! We need to tech the tech, quickly! We did it! Now the A plot is safe!) This one features a science investigation with Earth-relatable terms, so it actually merited paying attention to.

TNG later featured an episode in which Worf tries to connect long-abandoned Klingon youths to their glorious heritage (“Birthright”), and a DS9 episode involved a mostly-human colony with Klingon neighbors (“Children of Time”).  Kudos to Vornholt for predicting that.   He also uses the same exact quote that Picard quotes later on in the episode “Drumhead” — ‘when drums beat, the law is silent’.  (Speaking of:  what with the violent boys, their worship of the Chief, and their obsession with drums and encircling trials, Vornholt had to be drawing on Lord of the Flies!)   I probably wouldn’t have tried this novel but for two things: Ro Laren was on the cover, and John Vornholt penned it.  He’s not a particularly well-known author, but I’m familiar with him from his TNG Dominion War duology, which were the first TNG books I ever read. I read them multiple times, actually, and considering the heavy use of Ro Laren there he’s probably to blame for her being such a favorite character of mine.  She comes off well here, both as action hero and Starfleet scientist; Worf, too, gets some depth beyond “Grrr! Honor! WORF SMASH!”

Unfortunately, I think this is my last TNG novel with Ro Laren on the cover.  All good things…

BONUS POINTS: At one point, Worf literally turns his phaser up to 11.

Citizen, librarian, reader with a boundless wonder for the world and a curiosity about all the beings inside it.
View all posts by smellincoffee →
This entry was posted in Reviews and tagged Star Trek, The Next Generation, Warp Speed Discard Challenge. Bookmark the permalink.