Saving Congress from Itself

Saving Congress from Itself: Emancipating the States and Empowering their People
© 2014 James F. Buckley
120 pages 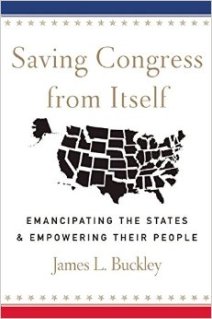 According to the latest Gallup poll, only 11% of Americans approve of Congress’ job performance, but virtually every senator or representative who runs for reelection will receive it.  Americans want Congress to do more, even as the institution proves itself incapable of doing much of anything.  The problem lies not merely in entrenched partisanship, but in misplaced priorities.  James Buckley argues that Congress is overworked —   not with its own responsibilities but of those of governors, state legislatures, mayors, and city councils.

The core problem is the existence of “grants in aid” programs, which transfer money to the states as assistance, and which carry with them stipulations for their use.  This allows Congress to  directly influence the policies of the states by offering money, and then explaining it can only be given out if the States follow Congress’ wishes.  The creation  and administration of these grants has become a major devourer of Congressional time.   Because the number of programs granting aid has multiplied several times over since the 1960s, there are more committee reports to listen to than there are hours in the day. Buckley, who prior to serving as a federal judge was a member of the Senate, offers a sample  daily agenda as illustration. Of the fifteen items spanning 9:00 a.m. to 10:00 p.m, only three had a national-interest scope, being items like reports from the US Army Corps of Engineers and a briefing on Iran. The rest were grant aid reports and requests, and so numerous were they that nine of the fifteen scheduled events had schedule conflicts with one another.  Congressional members either skip meetings altogether, or dash from one to the other to put in an appearance, relying on aides to fill them in on the substance.  Where is the time to read legislation, let alone pore over and discuss thousand-page bills?   (A bill forcing Congress to read the bills it passes has yet to make it out of committee consideration.)

Congressmen use their time in this fashion because it pays, at least for them.   While a national body should not be spending its time arguing and administrating local affairs,  this is the sort of thing local citizens actually expect their Congressmen to do.  When Mr. Smith goes to Washington and returns to townhalls with his constituents, they complain about bus routes and schoolrooms – and he, if he is able to finagle some funds for the locals, has an easy in come election day.   That’s not chump change, because when they’re not missing meetings or voting for bills without reading them, congressmen are constantly working to get themselves reelected, spending hours on the phone to beg for money.

This is a situation that must be altered.  Not only has Congress become patently dysfunctional, ceding every Constitutional prerogative to the executive branch,  but the weight of ever-multiplying grants is fiscally unsustainable. The United States government doesn’t generate money; it either takes it from citizens, issues bonds that future generations will have to pay for, or prints more and weakens the value of the currency.   Not only has the national government ceased to be effective, but the stipulations attached to these grants often compromises the aid as the funds are leached away on both ends in administration and in hiring lawyers who can interpret the Talmudic policy requirements.  The number of agencies is such that many have redundant — and sometimes even conflicting — goals, with fuzzily-defined metrics for success.  Aid can be done better, and so can government.  A constant theme in Saving Congress from Itself is that of subsidiarity, that in matters of politics, responsibility should remain at the level most capable of dealing with it. A city should take care of its own infrastructure; outside grants only prop up poor planning, like low-density sprawl,  and the ease of spending other people’s money means the funds won’t be put to their most productive use. (There’s no ‘skin in the game’, to borrow Nassim Taleb’s way of putting it.) The national Congress, with an entire world of challenges in front of it, certainly should not be deliberating on local issues.

Buckley ends the argument with several propositions that would serve to end this legislative torpor.    To curb the amount of time officials spend working on their reelection campaigns, he suggests we (1) restrict Congressionals to two terms, and (2) limit the president to one six-year term.  More drastically,  he proposes that federally-issued grants end altogether, being phased out. Initially, money would simply be issued with no stipulations, and after a pre-fixed number of years to allow state governments to adjust their budgets,  the grants would be no more.  Buckley cites the example of Rhode Island, which was given an opportunity: if it agreed to receiving less money, there would be no rules whatsoever attached to the use.  With no outside pressure, Rhode Island was allowed to tailor its own plan to its own particular need, with effective service increasing and costs declining.  If Congress does not admit or pass the necessary legislation, a convention called by the States could also propose and pass amendments.

Saving Congress is a short little book, and Buckley doesn’t waste a word.  I was aware of political corruption in regards to military contracts, but had  little idea for how Congress conducted its business.  Truth be told, I generally imagine Congress-folk to spend their time golfing, eating, and conspiring against the public.  Buckley’s argument is valuable in form as in substance. He approaches this from a nonpartisan observation that Congress is simply not performing. He doesn’t deny that people still need help, but the current approach isn’t doing it — and it”s costing local cities who keep looking to Congress, and distracting Congress from its actual constitutional responsibilities.  If nothing else,  Saving Congress illustrates why the American public continues to elect their senators despite loathing Congress altogether: it’s only pork on the other guy’s plate.: One senator’s wasteful spending is another’s putting ‘tax dollars back to work for you’. How about we dispense with the middle man and put our dollars to work for ourselves?

Citizen, librarian, reader with a boundless wonder for the world and a curiosity about all the beings inside it.
View all posts by smellincoffee →
This entry was posted in Reviews, Uncategorized and tagged civic awareness, law, politics, Politics-CivicInterest, subsidiarity. Bookmark the permalink.

2 Responses to Saving Congress from Itself