Posted on April 5, 2016 by smellincoffee 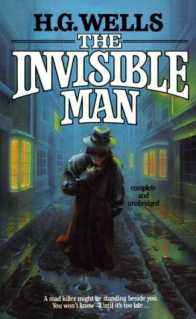 The Invisible Man opens with the arrival of a Mysterious Stranger to a country inn. He is covered from head to toe, and remains so even after he takes a room. The townsfolk don’t know what to make of the irritable visitor who insists on wearing gloves, a hat, and goggles indoors, and peevishness only intensifies their curiosity. That, and the fact that his luggage consisted of a small library and an enormous set of chemical apparatus.  The more time he spends with them the more suspicious he seems, and those who keep trying to get a feel for the man notice…curiosities. For instance, once his sleeve seemed to be empty, yet it moved in a way that would be impossible for an amputee’s.  Driven to frustration by their constant prodding, the visitor reveals that he is, in fact, an Invisible Man. From there, the plot is one of spectacle, siege, and violence as the Man lashes out in desperation. The other villages think the people in the first hamlet are lunatics, but soon the “madness” spreads as he moves. His every encounter results in contemptuous treatment of the terrified people he meets, followed  by attempts to subdue people with inexplicable force. It turns out that the English winter is not the best time to embark on an experiment in invisibility.  Invisible he may be, but he still still needs clothing and food — and both expose him.   Eventually the Man is cornered when he attempts to enlist the help of a university colleague. That man, Kemp, listens to his story but can’t help but notice that the Invisible Man seems to be the one instigating all of the trouble. He is especially bothered by the Man’s account of nicking a man’s goods….from his very house. This is England, you transparent lout, don’t you know a man’s home is his castle?  When the Man reveals that he wants to inflict a profitable Reign of Terror on England, that’s the last straw.  A trap is sprung, the man is caught, and when he dies the electro-chemical process he exposed himself to wears off to reveal him.  That’s that.

The Invisible Man is curious, as compared to the other Wells novels I’ve read. It drops the reader right into the middle of the character’s story, and doesn’t consist of any thoughtful narration. In recapping the story, I’ve attempted to be as sympathetic as I can, attempting to frame him as a man driven to desperation by the miserable condition he inadvertently cast himself into.  It’s a bit of a stretch, though, because the Invisible Man is a grump from page one, as though the invisibility simply escalated his own disdain and short temper. His intelligence is all technical; he doesn’t have the least bit of tact or strategy in his head.  A Reign of Terror in England? Sounds awfully French.   I don’t know if Wells was aware of the old Greek story about a ring that makes the wearer invisible and quickly immoral, but the lesson certainly applies to our fellow here.

This is a fast story, with the feel of horror.. The Invisible Man is more a monster to be feared than a man to be awed by or pitied.

Citizen, librarian, reader with a boundless wonder for the world and a curiosity about all the beings inside it.
View all posts by smellincoffee →
This entry was posted in Reviews, Uncategorized and tagged English Literature, H.G. Wells, science fiction, vintage SF. Bookmark the permalink.

5 Responses to The Invisible Man