Posted on December 14, 2015 by smellincoffee

Hack: How I Stopped Worrying About What to do with my Life and Started Driving a Yellow Cab
© 2008 Melissa Plaut
256 pages 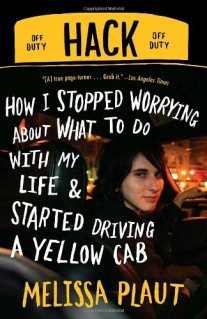 At the age of twenty-nine, Melissa Plaut was let go from her job at an ad agency. She found the layoff liberating instead of terrifying, freeing her as it did from a safe but utterly meaningless job where she felt distinctly like a sell-out. Having spent most of her twenties spinning her wheels at one safe job or another, she opted this time to pursue adventure.   So it was that she braved the labyrinth of New York bureaucracy and the warren of traffic to become a New York City cabbie.Hack collects stories from her blog about working the city streets, and as they are arranged she becomes progressively more miserable, eventually downshifting to the point that driving the cab is a part-time hobby instead of a career.

Although her stories behind the wheel constitute the bulk of the book (the exception being frequent breaks to chat about her social life) there is not a lot of revealed about the inner workings of taxi services in general. A combination of customer service, chronic traffic jams, and steady physical deterioration, taxi driving quickly loses its allure and becomes a daily grind for her. Working with the public at large is not for the faint of heart, and quickly takes an emotional toll on Plaut as she endures all kinds of abuse and contempt from her patronage. Soon she is bypassing types  (teenagers and grizzly men) who she suspects will be fare-jumpers or trouble-makers, and feeling guilty for not being as trusting and open as she once was.  Driving a cab for twelve hours a day also wrecks her physically; the human body was not meant to spend half its time sitting in an odd-shaped seat, one leg constantly working the gas or brakes and the rest comparatively inactive while the driver deals with the constant stress of traffic, hunting fares, and restraining her bladder. One of Melissa’s coworkers routinely soils himself, his continence wrecked by years of trying to hold it until demand slowed down.  Being the result of only a year or so behind the wheel, not much is said about the taxi industry in general: readers get a feel for how her particular company’s practices work, but that’s about it. There are moments of broader import, as when she weighs whether or not to make the most of a transit strike; ultimately, sheer fatigue at trying to work at all overwhelms any thoughfulness. Most of the book consists of stories about abusive customers, pushy cops, and her social life,  rendered with ample vulgarity. As one takes in her growing frustration — and her inability to find anything outside of work that will meet her needs for meaning or happiness — sympathy grows, especially when she witnesses a brutal traffic accident that reminds her all too much of her own near-miss, when a car struck her as a pedestrian and she was hospitalized.

Hack is interesting, though often ugly and not particularly useful about learning the ins and outs of the taxi service. It is good exposure to the raw experiences of drivers, especially New York cabbies who find the city government nearly as hostile to them as the public.

Citizen, librarian, reader with a boundless wonder for the world and a curiosity about all the beings inside it.
View all posts by smellincoffee →
This entry was posted in Reviews and tagged memoir, NYC, on the job, transportation. Bookmark the permalink.