Posted on November 18, 2015 by smellincoffee 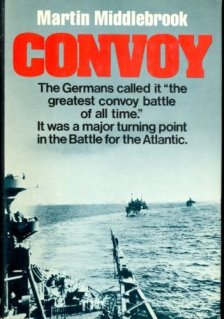 In his memoirs,  Winston Churchill admitted that nothing worried him quite so much as the U-boat menace. Britain could stand alone against a continental menace, but not without supplies from friends and her Empire abroad.  Submarine attacks on merchant shipping broke out almost as soon as war was declared, and reached their peak in 1943 as a massive wolf packs gathered and waited for convoys to appear   After an introduction which gives an intimate introduction to civilian sailors, Allied navy men, and German submariners,  Martin Middlebrook takes readers across the storm-tossed North Atlantic, following two convoys in a running battle with the greatest concentration of U-boats in the war. Dozens of merchant ships sank into the deep,  at little cost to the assailants, and Middlebrook uses the week-long drama as a case study to examine the U-boat threat and Allied responses to it. Though in part a military history, here civilian men and women are heroes as well,  fighting against their own fear and struggling together in the aftermath of attacks to survive.

By 1943, U-boats were no longer patrolling vast areas of the ocean and pursuing alone any merchantman they came across.  They were strategic weapons, directed and controlled from Europe itself, and fed by intelligence reports that let them know when to expect victims and where.  In response to the Allied strategy of forming convoys — scores of merchant ships flanked by a handful of escorts —   U-boats gathered en masse as well, forming picket lines where they expected a convoy to pass and then converging on it once contact had been made. As its name implies, Convoy is foremost a naval drama, but aviation is an indispensable aspect of the story.  Aircraft were the mortal enemies of submarines, providing effective screens around the coast and depth-charging vessels caught cruising on the surface.  Even B-17s could only range out so far, however, leaving an “air gap” over the mid-Atlantic,a large window of opportunity for U-boats to wreak havoc unmolested. It is in that window of space, the submarine hunting ground, that Convoy sets forth in.

For several days and nights, vast and lumbering ships carrying locomotives, invasion barges, cotton, wheat, and other sundry supplies to Britain lay at the mercy of dozens of U-boats, defended by a mere handful of escorts.   These escorts were not brand new destroyers run by top-rated seaman, either, but sometimes converted civilian ships equipped with depth charges, captained by retired gentlemen who in peacetime commanded only their personal yachts. One craft in the battle was so old that the English declined to borrow it through the Lend-Lease program! The middle section of Convoy follows the constant harrying of the fleet by a formidable gathering of U-boats, and is solid historical journalism; Middlebrook constructs the story based on numerous ships’ logs and survivor accounts. The appeal is not strictly military, however; as so many of the players  are civilians in extraordinary circumstances. Logs from both Allied and German sources are used, and the details and photographs communicate the combatants’  commonality as well. Though divided by war, they are no less united in their human frailty, in their vulnerability on the open oceans and their isolation and loneliness from serving from months on end in ports and waters far from home. The book is most helpful to a student of the period, however, ending with an analysis of the battle. Despite the losses inflicted on the Allies, matters could have been worse;  while the U-boat formation was engaged in confronting these two convoys,  so thick was the Atlantic with traffic that other convoys were able to hustle through other now un-guarded sea lanes.  Within two months’ time, various pieces of Allied anti-submarine warfare would click together; the air gap would be closed with longer-ranging aircraft, and the daunting strength of the U-boat fleet broken.   At the moment recorded here, however, and for the three years preceding it, their hands were at Britain’s very throat, and Middlebrook delivers a sense of peril quite well.

Citizen, librarian, reader with a boundless wonder for the world and a curiosity about all the beings inside it.
View all posts by smellincoffee →
This entry was posted in history, Reviews and tagged Britain, history, Martin Middlebrook, military, naval, shipping, WW2. Bookmark the permalink.