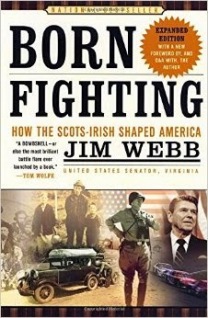 Born Fighting is a family story of the Scots-Irish, a clan of forgotten men. Beginning with the Celts, author Jim Webb moves swiftly through British history to the establishment of the Ulster Plantation.  Faced with continued resistance to the British crown by the feisty Irish, who were even more suspect by their frequent fraternization with Catholic powers like France and Spain,  King James hit on a novel solution: move in their equally feisty, but virulently Protestant, Scottish cousins.  As anyone remotely familiar with Irish history can guess, that didn’t end well;  northern Ireland was a warzone even throughout the 20th century.  But the Scots of the Ulster Plantation didn’t stay there;  they emigrated to the United States in large numbers, where they continued being…lively. Constitutionally incapable of bending a knee to a king,  they pushed into the American interior,  driving the frontier of colonization forward, provoking the natives into war and prompting a revolution.  Although  some would eventually make it to the west coast, the hills of Appalachia and the American South were settled in large number by these rebellious Presbyterians.  Settling down didn’t change too much, though; when  Abraham Lincoln called for troops to suppress the secession of South Carolina, the size of the nascent Confederacy doubled as the distant descendants of Robert the Bruce closed ranks to defend their land and kinsmen from invasion. Although they were defeated in battle, they continued to shape American history, swelling the ranks of the soldiery and producing country music.

Although Born Fighting has the scope of a historical survey, it’s much more personal. As mentioned, this is a family story, and it’s framed by Jim Webb’s journey into the Appalachian mountains to find his family’s bones, and the quest that ends at an ancestral graveyard  causes him to ruminate on how his people came to be in that land, so far removed from the hills of Britain and Ireland. It’s thus quite romanticized, its characters assuming airs of heroism or tragedy as the story waxes on. The rough, ornery wildness that Webb celebrates here as an antidote to tyranny is the same ‘cracker culture’ that Thomas Sowell condemned in Black Rednecks, White Liberals as completely-self defeating.  Webb doesn’t completely overlook  his kinsmen’s flaws; his defense of the South  owns up to slavery as the cause of secession, but he rightly distinguishes that from the motive for fighting. Slaves, like private jets and palatial estates today, were not owned by most southerners;  most, in fact were owned by a few dozen elite families. The country boys wearing grey weren’t fighting to keep their slaves, they were fighting because fighting rule from on high is a family tradition. The Scots-Irish, Webb writes, could respect authority from men who literally led them in battle, but never from enthroned men who dictate from afar, whether they be Caesar and Pope in Rome, or the president in D.C.

Born Fighting makes for fun reading, and it’s not immaterial: there are reasonable arguments here, taken from completely respectable surveys like Churchill’s History of the English Speaking Peoples, and WJ Nash’s The Mind of the South.  There’s always more to the story, though, and southern whites have not always been completely opposed to authority on principle. The New Deal that Webb mentions resistance to was much beloved by the poor South, black and white alike. In fact, a song mentioned in Webb’s section on country music refers  to Roosevelt “saving us all”, creating programs like the TVA that put the singer’s family back on its feet. Taken as a fond retelling of family drama, however, its weaknesses can be forgiven. There are other works for the serious readers. Like Cool Hand Luke, this is a celebration of a man, of a people, who can’t be told what to do and won’t give up going their own way, no matter how many times they’re beaten.

Citizen, librarian, reader with a boundless wonder for the world and a curiosity about all the beings inside it.
View all posts by smellincoffee →
This entry was posted in Reviews, Uncategorized and tagged American Civil War, American South, Britain, Celts, Europe, history, Ireland, race. Bookmark the permalink.