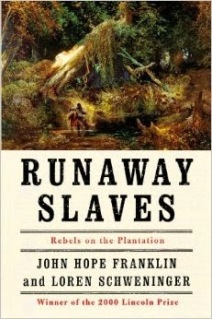 Easily the most horrible aspect of American history, is the institution of slavery.  Indentured servitude had been a historical norm for centuries before, of course,  usually the mark of war, but in America it was paired with racial ideology to become utter evil.  Although it eventually perished in 1865 at the hands of the 13th amendment, those whose lives it claimed were not necessarily willing to wait for freedom to be granted;  instead, they took it. In Runaway Slaves, historians John Hope Franklin and Loren Schweninger establish how chronic absenteeism and escape were throughout the slave states, revealing the institution’s gross unnaturalness and complete incompatibility with the human spirit.

Precious few people in the 21st century need to be convinced that slavery was wretched, and the few who maintain that it was a necessary evil, or that its abuses were exaggerated out of proportion, would do well to confront Runaway Slaves, presenting as it does not only one human story after another about men, women, and even children resisting tyranny over their lives, and ‘voting with their feet’ by  escaping into the wild, but statistical evidence that reveals how persistent a problem runaways were.  Readers might expect the abused to flee, and so they did, but here too are stories of slaves who were treated ‘well’ — plantation pets, like the few Jefferson kept in his mansion and doted on.  Even when provided with an allowance, comfortable quarters,  and easy work, slaves still persisted in running off from time to time ,to the utter bewilderment of owners who concluded that some Africans were simply born mad.  The runaways were not simply driven by some principled insistence that they ought to be free;  the most common motive cited here is reunification with family.  Of course, the data is incomplete; many runaways simply disappeared into history, and their motives and stories will never be told. Most did not attempt to to transverse the entire country to make into a free state, or Canada; instead, Franklin and Schweninger report, they either lingered around the edges of plantations (to be close to family, or help them escape), or migrated to a large city like Baltimore or New Orleans, where they could lose themselves in the masses that included substantial populations of free blacks. Because the data the authors work with spans most of the 19th century, readers will also appreciate slavery evolving as an institution;   legal terms of servitude that expire give way to perpetual bondage, and captured African tribesmen still bearing the tattoos and piercings of their tribe’s customs become the fathers of generations born into slavery, knowing nothing else.

Runaway Slaves is a solid piece of historical writing, providing human faces to the many thousands gone,  turning a multitude once viewed as a factor of production into lives who must be reckoned.  As soul-wearying as it can be to realize how many lives were wasted away in bondage, there is also room for hope in the fact that resistance was never absent from the scene. Regardless of beatings or bread and circuses, men are, and of a right ought to be, Free.

Citizen, librarian, reader with a boundless wonder for the world and a curiosity about all the beings inside it.
View all posts by smellincoffee →
This entry was posted in history, Reviews and tagged America, American South, Colonial America, Early American Republic, history, race, slavery and rebellion. Bookmark the permalink.