Race with the Devil

Posted on December 3, 2014 by smellincoffee

Race with the Devil: My Journey from Racial Hatred to Rational Love
© 2013 Joseph Pearce
264 pages 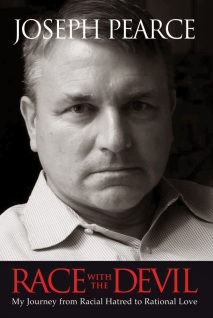 How does a neo-Nazi become a Catholic literary critic?  An act of God?   Joseph Pearce would surely make the claim, his life having become a miserable shambles before he heard the booming voice of Gilbert Keith Chesterton from beyond the grave (albiet through books).  In his youth, Joe Pearce was an influential white supremacist, rising through the ranks of the National Front through his one-man newsletter, Bulldog. Building success by appealing to football hooligans  and punk rockers, it caught the attention of not only the National Front, but of the British government, which twice threw Pearce into prison for inciting racial hatred.  His first time in chains only deepened Pearce’s conviction that the state was out to ruin the English race; by his second imprisonment, Pearce was already in turmoil, already doubting the path he had chosen. Turning prison into a spiritual retreat, he emerged from bars and from his own dark night of the soul to a new life.

In his new life, Joseph Pearce is a distinguished author and scholar, having held positions at institutions like Ave Marie University, Thomas More College, and Aquinas College. He has produced not only biographies of men like G.K. Chesterton and Alexander Solzhenitsyn, but works that delve into the deeper meanings of The Lord of the Rings and Shakespeare. This hunger to know the human soul through literature is partially responsible for Pearce’s salvation. Although as a teenager he was caught up in reaction against the upswell of immigration, and the enervating influence of modernist politics,  he found little to build on there. His life was filled with passion as he roamed the streets looking for migrant gangs or football clubs to mix it up with, and even some purpose as he became a shaper of the nationalist thinking, but pessimism was a bitter gall to sallow.  Works like Orwell’s 1984 diverted his course from fascism, awaking him to the danger of an all-power state,  but unsettled him with its dark vision of Winston Smith’s defeat, the spirit of humanity crushed underfoot.  Pearce could not live with it, but an abiding thirst for literature would offer him glimpses of a better world — particularly Solzhenitsyn’s Gulag Archipelago, a retelling of the author’s years spent in the Soviet prison-camp system, which he survived, humanity intact.

Pearce spent four hours a day reading on trains as he traveled for his duties with the National Front,    but literature took him places he surely never meant to go, like Rome. So against popery was Pearce that he traveled to northern Ireland to work with the Ulster Loyalists and joined the Orange Orange, dedicated to ensuring Protestant supremacy over Irish Catholic culture. As much as Pearce despised the Catholic church, he had a grudging respect for John Paul II’s fight against the Soviet system. It was G.K. Chesterton who coaxed him into the Tiber, however, by presenting an argument against the centralizing tendencies of both capitalism and socialism.  Chesterton offered a third way in which the ownership of the means of production – of shops, farms, tools, and the like – is widely as distributed as possible. Pearce, having grown up in ‘the shire’, a quiet arcadian community far removed from much of modernity, saw in Chesterton an argument for what he longed for.  Pearce’s love for his country, warped by racism,  was redeemed by Chesterton, refashioned into ideals of peaceful cooperation.  Delighting in Chesterton’s personality, Pearce  read everything he could by the man, and through his study came to appreciate the Catholic faith and its transcendent moral order that shed insight on not only personal morality, but our socio-economic structure.

Race with the Devil is a powerful story human redemption, part biography and part literary reflection. While the aspects on British culture were fascinating in themselves, particularly the political loyalties of football clubs and musical subcultures,  Pearce’s journey itself is the wonder. Consider how powerful ethnic nationalism can be, that potent mix of primal clannishness and modern ideology; it intoxicates both the brain and the blood. Yet Pearce resisted. Having approached the abyss, he stepped back. Despite all of the anger and fear he subjected himself to, there still remained some shades of grace, memories of that childhood steeped in ordinary decency.  When racial turmoil still fills American papers, it is a comforting notion that there still remains some escape route to sanity and healing.

Race is an extraordinary read.

Citizen, librarian, reader with a boundless wonder for the world and a curiosity about all the beings inside it.
View all posts by smellincoffee →
This entry was posted in Politics and Civic Interest, Reviews and tagged biography, Britain, Catholicism, Christianity, Classics and Literary, gangs tribes and parties, Ireland, Joseph Pearce, literature, politics, Politics-CivicInterest, race, redemption, religion. Bookmark the permalink.

2 Responses to Race with the Devil