Posted on September 13, 2014 by smellincoffee 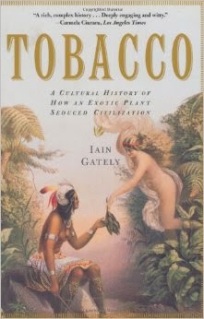 The age of discovery opened an era of global domination by European culture and power, but in at least one instance, the new world had its own victory. Tobacco, smoked heavily throughout the Americas,  took the world by storm once European sailors started smoking, sniffing, and drinking (!) it. sometimes reaching parts of the planet even before they did in a chain reaction. Tobacco is a straightforward history of the weed’s own conquest.

A native of the Americas, tobacco had many roles in the cultures of the Aztecs, Incas, and more. They smoked the plant, but they also applied its juice to their eyes and skin; the principle use of tobacco was in shamanic ritual and herbal medicine.  Europeans dabbled with this (there is no substance on Earth that has not been championed as a cure-all at some point), but  sailors and conquistadors soon used it chiefly for recreation.  Smoking was a completely new phenomenon to Europe, and neither the Catholic nor later the Islamic powers knew what to make of it. It stunk of the devil, but neither the Bible nor the Koran expressly forbade it, and soon enough even priests were taking snuff during Mass. Everywhere European trade-ships went, they took sailors and tobacco, and the people they met spread the good news of smoking with such profligacy that when European explorers penetrated the heart of Africa, they found tobacco already waiting.

Tobacco offered mental stimulation and relaxation without the drunkenness of alcohol, though there was still vomiting involved if one overdid it.. Tobacco was soon grown worldwide, and formed the basis of much of the colonial American economy.  Cigars, like whiskey, weathered Atlantic crossings far better than raw foodstuffs, and could retain value.  Their use as a trade commodity can’t be understated; even well into the modern era, tobacco was used as money. In World War 2, for instance, not only did soldiers and prisoners use cigarettes as currency within their respective institutions, but in financially-stressed Nazi Germany,  cartons of cigarettes were used as stable money when the official currency was being played with. (This, despite the official Nazi forbidding of tobacco!)

Besides recreation and money, tobacco served a multitude of ever-changing social roles. Different types of tobacco consumption marked different cultures, like the cigar’s association with power and the pipe with middle-class respectability.  The cigarette began as a French invention, and was resisted for the longest by English tabagophiles, who looked askance at anything French. Initially derided as weak, soft, and effeminate,  cigarettes eventually became the standard use of tobacco for various reasons — their cheapness, ease of use, and near-immediate addictveness among them.  People embraced the cigarette as a way to spit at traditional values; what Oscar Wilde started, flappers continued.  It helped that cigarettes had an enormous media presence; barred from depicting steamy romance onscreen, Hollywood used cigarettes to establish connections between characters and create imagery thick with innuendo. Even after concurrent skyrocketing rates of cigarette consumption and lung cancer indicated a medical crisis in the making, people continued lighting up. If anything, the warning labels and danger increased their allure.

Eventually in the English-speaking world, at least, governments decided to start taking more strident action;  in the United States,   areas where one may smoke are the exception and no longer the norm. Tobacco’s rise and possible fall have both happened with stunning rapidity, and Gately is an entertaining guide to its story; he delivers a bounty of information in one rapidly-moving narrative that doesn’t tire. . As with Drink,  Tobacco is globetrotting;  America and Europe get most of the attention, but no corner of the globe goes unremarked on.  Even for a nonsmoker like myself, Tobacco has value as cultural history, if only to demonstrate how quickly entire ways of life can be transformed, repeatedly. (It’s one of the reasons I like histories of consumer goods so much — the human capacity for fads is amazing.)  More importantly, it’s fun, a history filled with adventurers, rebels, pirates, and scheming businessmen.

Citizen, librarian, reader with a boundless wonder for the world and a curiosity about all the beings inside it.
View all posts by smellincoffee →
This entry was posted in Reviews, Uncategorized and tagged America, Britain, Colonial America, goods/services, history, social history. Bookmark the permalink.