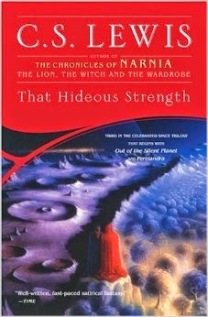 Mark Studdock is a newly married sociologist who has been given the opportunity of a lifetime; the chance to work with a promising and ambitious new research institute setting up shop in his sleepy home of Edgestow. Mark likes to rub shoulders with the progressive element within the college, and the idea of working with people whose dream is to offer to the world rational solutions to social problems — well!  That’s too good an opportunity to pass. Alas for Mark, good intentions mask fouler ones.  The National Institute for Coordinated Experiments is set on making the world in its own very rational image, yes;  no more, they hold, should be a man be constrained by tradition, by illogical authorities, by the limitations of flesh and blood. It has a vision for a world, but Mark soon discovers that that vision is a paradise in which humankind is distilled into pure consciousness, and the tired Earth freed from its mounds of organic infestation to the point that it resembles N.I.C.E’s view of a heavenly paradise, the Moon.

Such a sinister dream isn’t exactly what Mark would have expected from a research institute, but slowly and by degrees he is drawn deeper and deeper into the N.I.C.E’s conspiracy against mankind; seduced by the very propaganda he is tasked with writing and cowed by their threats to undermine his prospects and imperil his life should he not give them his full devotion.  His increasing entrapment is a burden on an already strained marriage, and here enters the second star of the book, his wife Jane. The Mrs. is being visited by nightly visions that reveal evil at work, hidden behind archetype and the fog of sleep, and the N.I.C.E. wants her abilities in their corner.  Their ambition is nothing less than the creation of a new breed of man, rationally superior and free from of the body; they defy the natural order of the cosmos and promise brutality to any who interfere. Those who disagree with them are wrong, and in need of education; those who resist merit death.  Against this sinister plot, however, stands the literal heir of King Arthur, a traveler of the stars who calls himself the Pendragon. He is the leading man in a resistance of light, whose greatest hope is to find the resting place of the ancient wizard Merlin, and awake him so that he can channel the power of the angels of the solar system and defeat the Devil’s work.

This is a very peculiar piece of fiction, the finale of a “Space Trilogy” that sounds like science fiction but is inspired more by fantasy, British mythology, and Christianity. The Christian worldview undergirds the virtuous characters, and their conversations often turn to moral philosophy, not because the heroes are absent minded but because the villains are wrong at a fundamental level. They see man as perfectible and the body loathsome, when in truth (says Lewis),  it is not the body that is corrupt but the human soul, having fallen into sin, and it is by no means perfectible except by grace. The Cosmos is likewise good in itself, declared as such by God, and it is beyond man’s ability to improve it or create himself in his own image.   It is not the human body that is corrupt, but the soul within it that has fallen into sin. The actual plot and characterization freely mixes elements of SF and fantasy, so that cosmic allies awaiting Merlin’s offering are not just angels, not just Greek deities, but ethereal space-beings waging for an opportunity to triumph over one of their own who is now rebellious. It’s the Lucifer myth for a new age, and one that. links itself to the West’s classical heritage,  a heritage defended here as the moral champions insist on the reality of natural law that the N.I.C.E. is attempting to overthrow.

It’s an interesting combination of theology and fantasy-fiction; Lewis’ background in Renaissance and medieval literature is on full display here as he steeps the narrative in mythic importance. Considering the horrors the 20th century had already endured in the name of science — Nazi eugenics and Soviet-style “scientific socialism” — little wonder Lewis regarded its elevation with skepticism. The tale is a sustained criticism of modernity, from its belief in technocracy to the increasingly triumphant  spirit of moral relativism taking root. Lewis’ heroes are an embattled minority, a pocket of grace in an England that has lost its way, and presumably he felt the same of himself and other Christian apologists. He makes the same arguments in The Abolition of Man, in which he writes that, having divorced himself from natural law,  having declared that all things are subjective,  all that is good and worthy within man has been cast way, abandoning himself to follow every vain and self-destructive impulse. The villains here are men without chests, literally speaking*, all head and no soul;  their concern is with ideological visions, so much so that they can view the wasteland of the Moon as a paradise, and the bounteous Earth as a fetid horror.  Undoubtedly Lewis,  taking in the atmosphere of the 21st century, would say the same of us; we, who cover meadows alternatively with parking lots and frankenfoods,  whose every ambition seems to be fixated on losing ourselves in the world of the screen, whose appreciation of morality is as such that presidents who order the remote-controlled destruction of neighborhoods in undeclared wars are lauded with a medal for peace.  The hideous strength has grown no less obscene nor less potent in the decades since this work’s publication.

Citizen, librarian, reader with a boundless wonder for the world and a curiosity about all the beings inside it.
View all posts by smellincoffee →
This entry was posted in Reviews, science fiction and tagged Arthur, C.S.Lewis, Christianity, fantasy, mythology, science fiction. Bookmark the permalink.