Where did the bicycle come from? Bicycle: the History tells the story in exacting detail, beginning in the 19th century. An age of progress  and scientific triumph, wherein everyday life was constantly being revolutionized by inventions, it set many people to work finding a way to improve personal transportation. Surely we could do better than moving our feet back and forth — so primitive! Why not do that on a set of wheels, instead? The first bike-like things were conceived as mere aides to running, driven by their riders striking the ground with their feet.  It took decades before pedals, brakes, comfortable seats, and the like were added to those first frames to make what we could recognize as a bike. In the intervening half-century, inventors pursued other avenues, coming up with bizarrely huge machines driven forward by people turning cranks with their hands, or the amusing high-wheeled bicycles, which required a ladder and the 19th century equivalent of an oxygen mask to cope with the thinner air.  Most of the improvements made to these early bikes, or velocipedes, created faddish vehicles that became national obsessions that lasted for a year or so before suddenly fading away into oblivion. The high-wheels had more staying power, but eventually they were humbled by simple improvements made to the original idea — and lo, the  Safety Bicycle.  Alas for it, it had scarcely come onto the scene before the motorized, horseless carriage also came sputtering and coughing onto the road, and the 20th century belonged more to the automobile than the humble bicycle. This was especially true in the United States, but not quite as much in Europe or in China, where space and poverty (respectively) limited motoring’s expansion.  Bicycle is  most thorough, at least in covering the 19th century: at times it offers a year by year account of the velociopeding fads, at times verging on plodding when it fixates on patent battles. Though sometimes technical, Bicycle also covers the human aspect in full, demonstrating how bicycle usage changed patterns of dress and social mores, and began working the general culture. The text is also replete with scores of historical photographs, many gorgeous, which liven up any dry spots. Though it could have used more information on the 20th century, on the whole this is an impressively thorough history. 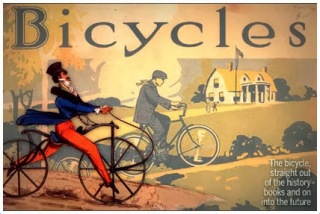 Citizen, librarian, reader with a boundless wonder for the world and a curiosity about all the beings inside it.
View all posts by smellincoffee →
This entry was posted in history, Reviews and tagged America, bicycles, Britain, France, history, transportation. Bookmark the permalink.