Posted on August 1, 2013 by smellincoffee

The Unschooling Handbook: How to Use the Whole World As Your Child’s Classroom
© 1998 Marry Griffith
240 pages 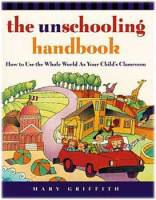 What does it mean to educate a child? In the United States, schooling is dominated by standards, by regular exams that force educators to teach the test. But is forced memorization a means of teaching our children well?  Mary Griffith thinks not. A practitioner and advocate of “Unschooling”, she believes children ought to be free to learn the way adults do: autonomously, pursuing their own interests with the support of their family. In The Unschooling Handbook, she explains the unschooling philosophy, elaborates on how children can pursue understanding of reading, math, science, art, and even history by themselves,  and offers parents who are considering the prospect resources to make the leap. Intriguing and smartly organized, it’s a welcome perspective in reflecting on education.

What happens to destroy the natural curiosity of children, corroding kids who delight in learning about anything into reluctant attendees who look on the schoolroom as if a drilling dentist were waiting for them there?  The answer is the decidedly unnatural approach of compulsory education, making children to rise early and spend all day under the authority of adults they neither know nor trust,  and forcing them memorize a variety of facts about a series of subjects that may not interest them. If a subject does not hold a child’s interest, Griffith writes, why do we expect them to retain any knowledge at all?  The information may be held long enough for the test, and then promptly dumped.  The children are not improved by having been forced to memorize it, and the public is not better off for having used resources to make them do it.  That Griffith is concerned with the quality of her child’s education is something of a relief: other criticisms of the public schooling systems I’ve encountered all had ideological roots,  with the parents being paranoid about the prospect of Other People influencing their children, zealously guarding their progeny’s craniums like Gollum guarding the Ring.  Griffith doesn’t complain about the Government trying to turn her child into a socialist minion, or a docile sheep for the new world order.  Her philosophy does run counter to the state’s approach to education, though, and borders on libertarianism: she does not believe in making her child learn anything. She instead trusts that children will eagerly want to learn about a wide variety of subjects, if provided with the right tools. The parents’ job is to guide kids through the world, showing it off, and then helping them investigate whatever catches their interest.  It may be Anglo-Saxon mythology or geology; it may be Candy Crush.

The potential for abuse is a notable limitation of the unschooling approach, for children are not known for being moderate souls. What is to keep a child becoming obsessed with one subject, and learning nothing at all about mathematics?  Griffith’s permissive streak seems a vulnerability in a world full of addictive, ever-accessible smartphone games: her technological references stop at 1998, which limits the section on the uses of television and the Internet in education for modern readers. (YouTube is a fantastic resource for learning, but it’s also a fantastic way to waste time perusing funny kitten videos.)  The author’s answer is that children will, in time, grow bored  even in these indulgences. Trust them.  It’s a nice thought, but I’d rather err on the side of discipline. The permissive-parenting argument is a separate argument from that concerning unschooling, though, and that I rather like. I like it because I have learned more reading popular science texts on my own than I ever learned in school, and because the comprehensive variety of information I absorb through my own studying is infinitely more useful than memorizing a few rote facts that pass into oblivion.  The greatest weakness of unschooling is that parents’ lifestyles may not allow for it: when living costs such that both parents have to work to support families, who can stay home to attend to the children? Reflection is warranted: perhaps a superior education for children, and a closer relationship between parents and children as a result of more time spent together, and less fighting with them to conform to school’s regimented schedule and curriculum, would justify a family deciding to downshift so it could afford to run on only one salary.

The unschooling approach demonstrated here makes learning a family experience. Education is not something children endure while mom and dad go to their jobs in the ‘real’ world; instead, education is part of exploring that real world. The core of The Unschooling Handbook is its section illustrating how kids and parents can learn together about the world. Some subjects, like art, music, and science, are naturally entertaining, and those which require more discipline aren’t too difficult to pursue, either:  children will gravitate to learning to read if they see their parents reading, and if they are read to.  This kind of education requires care on the parents’ part, as they are the cultivators of their children’s minds.  Although all children find the natural world awe-inspiring and fascinating, many adults find science dull, probably because their experience with it has involved more the memorization of facts and less hands-on experience that seduces them into learning more about the subject, and eventually to adopting the tools of science to learn even more. A child can be taught botany from a garden and chemistry from the kitchen.  What parents can do is help guide learning from the reactive ‘wow’ to the ‘Eureka!’ that follows dogged research. A key seems to be relevance:  children may squirm if made to memorize the dates and names of English kings (unless they find the recent birth of the latest prince interesting, as so many Americans inexplicably do), but if history is used to awe children with the fact that the places they see around them, and their family, have a greater story than what is presently seen, it may take root.  This approach hearkens to our species’ ancient practice of oral traditions: being engaged by history is in our blood.

The Unschooling Handbook is both thought-provoking and useful, if dated.  I will assuredly be reading more about this subject — for I believe learning ought to a result of our enthusiastic attempt to understand the world, and not a forced exercise in training.

Citizen, librarian, reader with a boundless wonder for the world and a curiosity about all the beings inside it.
View all posts by smellincoffee →
This entry was posted in Reviews and tagged children, education, marriage and family, natural lifestyle, parenting, praxis, social criticism, Society and Culture, technology, Technology and Society. Bookmark the permalink.