Posted on November 5, 2010 by smellincoffee 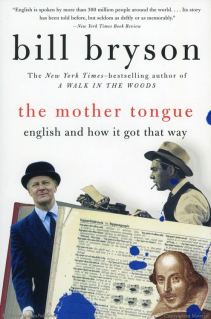 “More than 350 million people around the world speak English and the rest, it sometimes seem, try to.”
While I’m reading this as part of a general English-culture theme this week, I would have inevitably picked it up at some point:  language has fascinated me since high school, and I’m forever writing down words and turns of phrase in my journal to look up their derivations at a later point. I know Bill Bryson only through A Short History of Nearly Everything, which I remember favorably even if I don’t recall too much about its contents, having read it perhaps five years ago.
Although I anticipated The Mother Tongue being a history of the English language, it’s more than that. Bryson begins with the development of speech and evolution of languages before moving swiftly to Europe to describe the various German, French, Viking, and  Celtic histories that coalesced in the British isles to give rise to a genuine world language,  English. After this initial history, he dedicates separate chapters to the development of words, accents, pronunciations, spelling habits, grammar, names, profanity, and wordplay before tracking English’s spread as a world language and contemplating on its future.
Bryson is an entertaining author, providing humor in bounds. The book only suffers once or twice from long paragraphs of examples, these being exceptions to the general rule of readability. Bryson’s information paints a picture of English changing through the ages detailed enough to provide surprises to even a word-nerd like me. I expected that irregularities in spelling would be ironed out by the introduction of the printing press, but I was not aware that many of English’s  Latin spellings (in debt and doubt, for instance) were imposed long after the language came into its own by those who wished to ennoble English — to root it in the old classical tongues and make it something other than ‘vulgar’.  Various attempts have been made to make English orthodox, but nothing appears to stop it from steadily growing and assimilating other languages. The Mother Tongue reveals English to have a long, storied history, one that has given its current versatility and humorous contradictions. I’ recommend it if you are at all interested in the subject proper, etymology, or Bill Bryon’s work in general.
Related:

Citizen, librarian, reader with a boundless wonder for the world and a curiosity about all the beings inside it.
View all posts by smellincoffee →
This entry was posted in history, Reviews and tagged Bill Bryson, history, humanities, language. Bookmark the permalink.

2 Responses to The Mother Tongue