Posted on November 17, 2020 by smellincoffee 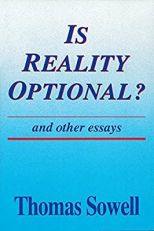 “The curious task of economics is to demonstrate to men how little they really know about what they imagine they can design.” – F.A. Hayek

From economist and cultural critic Thomas Sowell come this amusingly-titled collection of essays,  loosely gathered under the theme of pointing out inconvenient truths. The title caught my eye because society seems to become more of an obscene cartoon, a farce on the stage,  with every passing year. The essays are  presumably drawn from columns Sowell contributed to newspapers over the years,  spanning the seventies through the nineties, on a spectrum of topics:  sex ed, crime & punishment,  race, sex,  and the virtues of map projections. The title essay opens the book, as Sowell points to various movements within the US which, however well-intentioned in their motives, are unrealistic in their aims —  and irresponsible, as their actions affect not only them, but the public interest.  Also within the collection are sketches, intended as humor, with varying results.

Sowell is first and foremost an economist; I first encountered him via Basic Economics, and he uses economic principles to inform his critiques of society and culture,  particularly the observation that there are no solutions, only trade-offs. this not only means every action taken by a government, business, or person will have negative consequences,  it means we usually have to weigh things in the balance. Do we want safety?   How much safety? How many inconveniences are we willing to endure, how much are we willing to pay?   No two households come to the same balance, and will chose different options depending on how how much risk they’re willing to court, and how much money they’re willing to pay. The balancing act can be applied to anything, and it often appears in the essays — applied in his evaluation of a environmental movement, and its  useless denunciation of both fossil fuels and the only meaningful alternative, nuclear energy. (Solar & wind are not as expensive as they once were, but they’re not serious options for carrying the base load of any modern society.)

There is no point trying to appease the anointed by giving in on some particular issue they raise, because that only shifts the fight to some other issue. The basic underlying problem is that they do not live in the grubby world of trade-offs with the rest of us. They live in the loftier realms of their own minds where “solutions” prevail.

Sowell’s attitude is one of pragmatism and prudence:   it if ain’t broke, don’t fix it. People may experiment on themselves at their leisure, but trying on new social theories every other year is hubristic and irresponsible. Sowell points to the frequent changes in educational theory, in  crime mitigation, etc and to their repeated failures. Too often, he says, we replace what works with what sounds good. This is the third Sowell work I’ve read, and I find him of such great interest that I hope to continue exploring his considerable output as time goes on. Sowell’s perspective is especially powerful when writing on matters of civil rights and race, because he lived through the death of Jim Crow, the arrival of affirmative action, and so on.  As a black intellectual himself, he encountered and triumphed over both racism and ideologies which deny minorities real agency — instead insisting, ever so patronizingly, that they are the state’s wards who need special hand-holding.   (I’ve come to realize in the last ten years that the government acts like some demented jailer in regards to the working class….raising barrier after barrier to prevent people from prospering, like imposing cosmetology licensure requirements on hair-braiders, and then expecting worship when it offers half-cocked solutions to the problems of its own making — like helping the Saudis bomb Yemen, then offering aid to the survivors.  )

Unfortunately, although these essays date from the seventies, only their statistics are dated. Foolhardiness of past decades has been surpassed by even more outrageous social movements  and proposals today today, like the ‘green new deal’, a product so divorced from reality when its details are considered  that only a sheltered politician could propose it, and certain social movements in which mental issues are attempted to be ‘fixed’ by surgeries and chemical bombardment.  To believe that sex is malleable is to believe that reality itself has no substance, that the world can be made to confirm to our will.  It would be nice if we could transform the world that easily,  but reality   is obdurant. Evidenced by Sowell’s writings,   this is not a new problem with the human race, though it’s certainly a greater issue now than ever before.  At least the ancients knew that if one appealed to the gods to give them what they wanted, great sacrifice would be necessary. We seem to think it can happen with the simple passing of legislation, and the liberal application of other people’s money.

6 Responses to Is Reality Optional?