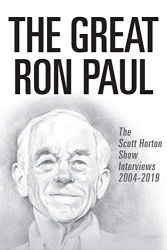 Who is Ron Paul?    That question was on posters across my university campus in 2008, and I couldn’t help but be curious.   A social democrat at the time, I appreciated his foreign policy and unequivocal stand on civil liberties, but was otherwise disinterested.   I’ve grown to appreciate him considerably more over the years, but I bought this particular collection because my robust appreciation for Scott Horton, the voice in the wilderness.

A few years back I heard an interview with Horton on American foreign policy, and I’ve followed his work avidly ever since.  Scott has been doggedly reporting on foreign policy misadventures since 2003,  with thousands of recorded interviews at his website.  One of the few politicians Scott admires is Ron Paul,  who for years was a lone beacon of resistance in DC, continually trying  call attention to DC’s destructive and wasteful foreign policy, as well as its destructive and wasteful policies at home.  Although he’s since retired from politics,  Paul remains an important figure in the libertarian movement, having inspired many young people, and he continues to comment on the news via his daily Liberty Report.   The Great Ron Paul collects his interviews with Scott Horton from the onset of the Iraq invasion through to the present year. In this collection, Horton and Paul cover foreign policy, the financial meltdown of 2007-2008,  the Obama administration’s successes and failures, and respond to the goings- on of the day, usually with a connection to their respective interests.

Horton and Paul both have their pet subjects: Horton’s is foreign policy, and Paul’s is monetary policy. One of those, frankly, is a lot easier for me to get excited about (I read fewer books on monetary policy than I do astrophysics),   so I’m glad there’s a back and forth here between the two leading topics.   DC’s distortionate role on money and markets is absolutely worth understanding:  the Fed’s ability to print money at  will allows it to wage war across the globe for decades, evading pushback by making the financial consequences another generation’s to bear. Although I’ve enjoyed Paul’s perspective when I’ve heard interviews with him, I’ve not read much of his writing before, beyond The Revolution (2008), and so was able to gain a new appreciation for him as not only one of few men in Congress who stood on principle, but as someone genuinely interested in working with ‘the other side’. Paul frequently partnered with Dennis Kucinich, for instance,   and maintains that if Liberty is to prevail, a genuine revolution in thinking would be required, influencing the policies of both halves of the RepuliCrat party.   Concerned about the poor and homeless, Democrats? Go after occupational licensing laws and legislation  that smothers  every housing option but “Single family detached McMansion”.  Support sound-money measures that would stop inflation from devouring the income of the least of us. Republicans concerned about fiscal responsibility?   …okay, nevermind. Republicans concerned about  security threats? Stop creating legions of bin Ladens in  multi-trillion dollar debacles started to prevent future Hitlers.  This reaching both sides is especially important to me because I came into libertarianism via the left — after realizing that the government simply could not do what it said it could do, and in its labors to try, it only made matters worse or made itself a vehicle for cronyism.

Although I already appreciated both of these men,  reading this collection was a solid reminder of why — and  my appreciation for Horton especially grew after I learned that he used to run an pirate radio station where he worked with members of the left to share information about DC’s chronic foreign policy fiascos.   His speech on alternative media was one of my favorite pieces, lambasting the Clinton-Bush consensus that perverted free trade into cronyism, and self-determination into constant invasions and management of people abroad.  This same speech pointed out how twitter, google, facebook,  and the other social media giants are silencing criticism on the left and right.   Instead of being  an information network that can take us anywhere, the internet is turning into another corrupt cul-de-sac, ending in a familiar place: enthrallment to the State,   worshiped by socialists on the left and the tribal nationalists on the right.   These two are an interesting pair — the grandfatherly Ozzie-Nelson -like Ron, and the youthful rebel Horton — but their commitment to communication, not condemnation, makes them much easier to recommend to people than someone like Lew Rockwell, who writes on the warpath.

P.S.: Ron Paul’s 85th birthday was yesterday,  something I didn’t realize until after I’d finished the book. Nice coincidence, that!

Citizen, librarian, reader with a boundless wonder for the world and a curiosity about all the beings inside it.
View all posts by smellincoffee →
This entry was posted in Politics and Civic Interest, Reviews and tagged libertarianism, Politics-CivicInterest, Ron Paul, Scott Horton. Bookmark the permalink.

3 Responses to The Great Ron Paul