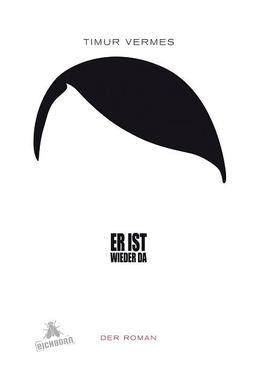 Hitler’s back, and boy is he popular on YouTube. Look Who’s Back!, as translated into English,  opens with an extraordinary premise: Adolf Hitler,  who for the west is the Face of Evil,  has found himself….unexpectedly alive. One moment he was in the Fuhrerbunker,   conducting the last-ditch defense of Berlin against an even more murderous dictator than himself, and the next…he was lying in the grass in the middle of Berlin,  nearly seventy years later.  Mistaken for a street performer using a controversial appearance to speak out against various social issues, and snatched up by a media company, Vermes-Hitler roars again to national prominence…this time, through social media.   So begins a dark comedy with a serious point.

I encountered this story through its superior movie dramatization, and found it amusing and provocative. Vermes-Hitler is an outsider, trying to understand the world around him, with varying results. Everyone believes he’s a comedian, and that his constant questions about the world around him, or his pointed opinions about them, are part of his act. He’s received with a mix of discomfort and delight, sometimes simultaneously. As one flirty barfly comments, “You may be awful, but at least you’re not boring.”  Traveling throughout the country and speaking with both the poor and influential, he builds an enormous following through his sharp and forceful commentary on everything from Turkish immigrants to the dangers of vehicular cellphone use.   Between a practiced stage presence and personal charisma, Vermes-Hitler overwhelms even those who find him patently offensive. The people are his piano, he says; and he is their Mozart.

Having a version of Hitler in my head while reading this was a disconcerting experience,  but Vermes’ frequent use of Hitler as a comic character eases that quite a bit. He’s not sympathetic, of course; even if  the reader finds unexpected common ground with his comments on the impotence of Germany’s present politicians, or the need for this economic reform, or for more conservation, etc,   Vermes-Hitler frequently reminds the reader of his nature by making mental notes to have this-or-that person thrown into the prisons once he’s rebuilt the movement and reclaimed his role as leader of the “Volk”.   Shock and laughs have an odd dance in this book.   In addition to Hitler’s use of Cockney rhyming slang, there are puns and jokes for those who know German, or German history: a frustrated secretary suggests her new boss get a cellphone; they’re “handy“, she says.  Hitler asks to see a mirror and is handed Der Spiegel, and refers off-hand to ‘my struggle in Munich‘.    The history in-jokes go beyond puns, as when Hitler finds the thought of his old PPK pistol to give him a headache.

What is the point of Er Ist Wieder Da?     I assume it gives voice to frustrations in Germany over various domestic issues (Germany’s milkcow role in the EU,  immigration,  environmental concerns, etc),   but what about non-Germans?   In reading this one can certainly appreciate why a creature like Vermes-Hitler would have made himself popular;  he is forceful and charming at the same time, speaking   his mind with quick clarity and never prevaricating.   The movie certainly has a powerful message for all viewers , but I’ll save that for the Reads to Reels followup.  At most we can say  it offers an imagined glimpse into why Germans found Hitler compelling, and reminds us that many of the issues and frustrations are still alive today, and ripe for an opportunist to build on.  The book is prescient, given the surge in populist parties in Europe following the migrant crisis, and  the appearance in the US of a forceful politician who achieved fame through provocative remarks and populist appeal.

Although Er Ist Wieder Da‘s story is  weaker than anticipated, if you’ve seen the movie which utterly eclipses it,   experiencing Vermes-Hitler’s internal narrative adds to the cinematic experience.  The book is entertaining and laudably daring, especially in an age in which so little can said without sending the bobble-heads on Twitter into an apoplectic rage.  In reading, though, I can only compare it against the movie which so succeeded it.

To put it another way, conditions were absolutely perfect for me. So perfect that I resolved at once to examine the international situation in greater detail. Unfortunately I was detained from my research by an urgent communication. Someone with whom I was unacquainted had turned to me with a military problem, and as I was currently without a state to govern I decided to lend my comrade my support. Thus I spent the following three and a half hours engaged in a naval exercise by the name of “Minesweeper”.

I moved forward and readied myself to speak, but then merely crossed my arms – at a stroke the noise level dropped further by one hundred times, one thousand times even. Out of the corner of my eye I could see Gagmez the dilettante starting to sweat as he watched apparently nothing happening. I realised straight away that this man feared silence, and knew nothing of its power. His eyebrows contorted into a grimace, as if I had forgotten my script. An assistant tried to give me a sign, tapping furiously on her wristwatch. I prolonged the silence even further by slowly raising my head. The tension in the room was palpable, as was Gagmez’s anxiety. I enjoyed it. I let the air flow into my lungs, straightened up and broke the silence with a barely audible sound. When everyone is listening for cannon fire, a falling pin can suffice.

And much as I appreciate the careful handling of Volk property, I cannot recall large numbers of buildings having been damaged during my time in government, despite the generous use of candles. But I do concede that, from 1943 onwards, the statistics become rather less meaningful given the increasing absence of buildings.

Citizen, librarian, reader with a boundless wonder for the world and a curiosity about all the beings inside it.
View all posts by smellincoffee →
This entry was posted in Reviews and tagged Germany, humor. Bookmark the permalink.