The Science of Breaking Bad 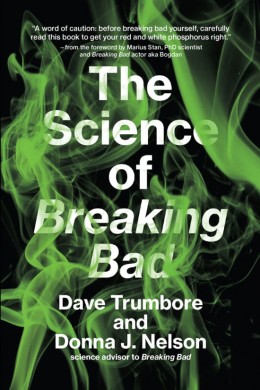 Breaking Bad remains the best-scripted, -filmed, and –acted show I’ve ever watched, and no matter how many times I watch a given episode, it never loses its compelling nature.  Breaking Bad is unusual for most television in its heavy use of science, with a main character who prides himself on his chemical prowess and technical discipline as he transforms from chemistry professor to meth king over the course of  two years. Although the show’s creators used extensive web research to begin the development of the character and show’s scientific creds, they  received a shot in the arm when Donna Nelson, a chemistry professor with an interest in using Hollywood to increase scientific appreciation and literacy, volunteered to serve as an unpaid science advisor. She fielded questions from the writers, supplied equations for Walt to scrawl on his blackboard, and informed the show’s vocabulary.   Now she and a co-author have created  a review of some of the scientific content of Breaking Bad,  encompassing meth, explosives, and the perfect cup of coffee.  Written with passion, a whiff of dark humor, and a lot of reminders not to try this at home,   The Science of Breaking Bad  is a welcome review of the show from a unique perspective,  though not one aspiring meth cooks or those who haven’t seen the show should read. (There are no recipes, but there are spoilers a plenty.)

Breaking Bad, for the uninitiated, is a crime and character drama about a chemistry professor named Walter White whose cancer diagnosis threatens to destroy his family financially,  unless he can make some quick cash on the side by using his chemical genius to produce meth. But once you start down the meth path, forever will it dominate your destiny,  Walt’s secret desire for reputation and his immense pride in what he’s capable of transform him into a lab-coated Moriarty.    Nelson’s evaluation of the show covers pretty much everything: Walt’s chemistry lectures when he’s still a high school teacher;  how the explosives and poisons worked that he used to disable (or kill, once he’d become the mask) his enemies;  how meth works on the body and the various ways it’s produced, several of which Walt used in the show.  (The filming of the meth process frequently mixed up methods, which was done to frustrate those who were trying to take notes on how to become dealers themselves.)  Nelson also departs from chemistry to discuss the psychological trauma that several characters go through (Hank and Jesse, primarily), and throws in one cybercrime reference.   Nelson includes a fair view production details beyond the science, too.

Fans of Breaking Bad  who also have a strong interest in science will find this one a fun read; although chemistry is one of the harder scientific area for me to embrace,  Murphy should be praised for using a popular show like this to try and teach a little more of it.

And if you can’t get enough BreakingBad, Melodysheep (the creator of those awesome Symphony of Science videos) has done a remix that has no spoilers:

There are two others I’m aware of not by Melodysheep; the first is a musical video based on seasons 1 and 2, the other on seasons 3-5.   These both flirt with spoiler territory and are more language-heavy,

Citizen, librarian, reader with a boundless wonder for the world and a curiosity about all the beings inside it.
View all posts by smellincoffee →
This entry was posted in Reviews and tagged arts-entertainment, chemistry, science. Bookmark the permalink.

3 Responses to The Science of Breaking Bad