The Goodness Paradox: The Strange Relationship Between Virtue and Violence in Human Evolution
© 2019 Richard Wrangham
400 pages 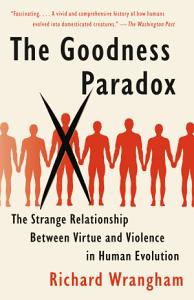 The Goodness Paradox cannot help but be fascinating, for it seeks to address one of the most pressing questions of human history:  how can a species so consistently capable of beauty and moral greatness also be capable of moral outrages like mass murder?   Why do so many invading armies, singing paeans about virtue, turn into gangs of looters,  casual butchers,  rapists, and arsonists?   Wrangham tackles that question, but first he has to address another one: why are humans so weird?

Humans are weird in all kinds of ways, but Wrangham is chiefly interested in our oddly bifurcated relationship with violence.  Believe it or not, but we’re surprisingly peaceful creatures. While a  chimpanzee can’t go a day without being screamed at or beaten, many humans can go years without being involved in any serious violence. Place two adult chimpanzees who are strangers to one another in a room, and a fight will ensue; place two adult humans in the same context and they may do all manner of things, from sitting and staring to trying to communicate, but odds are they won’t immediately try to kill the other.  Humans have an astonishingly low amount of ‘reactive aggression’,    which is overshadowed by our intense pro-active aggression.  Why are we so much more easy-going most of the time compared to our closest relatives?

The answer, Wrangham argues, lies in our being  a self-domesticated species.  Domesticated species display many consistent traits, like the retention of juvenile behavior and physical aspects.  Domesticated species are also much less reactively aggressive than their wild counterparts. After making a case for humans being a domesticated species, he then shifts to explore how that might have happened. The key, Wrangham suspects, is language;   once our ancestors gained the ability to effectively communicate,  it was then much easier to form coalitions against domineering individuals.  Those who were pushy, aggressive,  and adversarial could then be ambushed  and dispatched a la Caesar. Over time, Wrangham suspects that this not only discouraged reactive aggression, but that it promoted people with higher social awareness – that is, those who could anticipate how their behavior would be read by others.    This resulted in humans being more intensely tribal-oriented than other apes (who often engage in behavior that’s destructive),  and developing a strong moral sense – not simply empathy or a sense of fairness, but a judgment of behaviors being Right or Wrong.   This moral sense not only prompted people to behave, but when there were offenders, it invigorated the desire to punish them. Morality, then, is a double-edged sword:    protecting against  some violence while promoting it in other cases.  Beware the ape or army that thinks itself righteous!

The above is a very compacted and abbreviated version of an argument that Wrangham develops far more gracefully, with many more sideroads that were equally as fascinating.  Given that the book addresses violence,   be warned that there’s a lot of it in here  —  beatings, rape, etc – from both human and other great ape quarters.  I’ve  seen bits and pieces of Wranghan’s argument before (the argument that humans are very much like juvenile apes, or the need for coalitionary violence to maintain egalitarian societies)  through books like The Righteous Mind,  Hierarchy in the Forest, etc), but  was much impressed by Wrangham’s case.  The Goodness Paradox will be one of those books I remember and think about for years to come.

Related:
Catching Fire: How Cooking Made us Human, Richard Wrangham

Citizen, librarian, reader with a boundless wonder for the world and a curiosity about all the beings inside it.
View all posts by smellincoffee →
This entry was posted in Reviews, science and tagged anthropology, evolution, manners and morals, science. Bookmark the permalink.

1 Response to The Goodness Paradox