Why is Sex Fun?

Why is Sex Fun? The Evolution of Human Sexuality
© 1997 Jared Diamond
172 pages 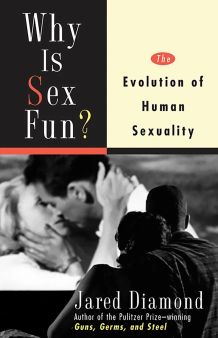 Why is Sex Fun is a provocatively titled, slim volume on the evolution of human sexuality. Diamond never addresses the titular question, though,  instead  evaluating why  (1) humans are mostly monogamous, (2) why ovulation is a concealed process, and (3) why women’s reproductive systems have an automatic shutdown. Diamond argues that males and females have competing sexual interest, and that the pair-bond generally works to balance them  — giving males  some reasonable expectation that the kids they’re providing for are in fact theirs, and giving females support in term of material provision, for both her and the kids.  Male competition for  secure mates means that young children are often killed to make way for a dominating male after he claims a given female; Diamond suspects that hidden estrous  undermines this tendency in humans, by making it impossible for a male to dominate a female’s ovulation period.  Various males who have mated with a given woman can plausibly believe her kids are theirs, and have less incentive to kill them.  As to the final question, since labor is often deadly even to younger women, Diamond suspects that menopause is a way for the aging body to protect itself and focus energy on already-existing children. Why is Sex Fun would be of considerably more interest had it not been overtaken  by other, broader books on the science of sex, like The Queen’s Race,  Sex at Dawn, etc.   A lot of the information here has been re-presented in more modern works, in a less dry style, leaving Diamond’s the chief virtue of being short.

Citizen, librarian, reader with a boundless wonder for the world and a curiosity about all the beings inside it.
View all posts by smellincoffee →
This entry was posted in Reviews and tagged anthropology, Jared Diamond, science, sexuality. Bookmark the permalink.

5 Responses to Why is Sex Fun?