Posted on September 26, 2019 by smellincoffee 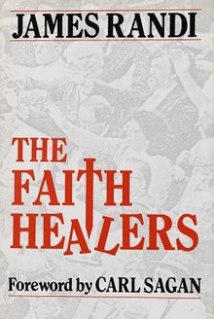 Recently I chanced to watch a lecture by “The Amazing” James Randi, a professional magician who, in the 1980s,  began investigating paranormal racketeers — and exposing them.   As someone who used people’s assumptions to amuse them, Randi took offense at those who trafficked in cheap tricks to make people believe they really possessed supernatural abilities.    Hucksters weren’t limited to spoon-bending Israelis or contemptible  women named Sylvia Brown, though:   there were also the shellacked-haired  preachers, who with unctious manners charmed and wheedled money out of millions of poor, infirm,  aged, and desperate people  — claiming God was talking in their ear, telling them about these people’s fears and needs,  and offering healing for a little ol’ donation.

Randi refers to these men as the Faith Healers, although  some distinction should be made between the merchants of false hopes on television who he takes on here, and the tradition of faith healing which is common in some Christian sects,  especially Pentecostalism.    The difference between them is that the latter are sincere, more often than not;    I grew up in the Pentecostal church and left it in late 2005,  and at least three times a week (for most of my life) I saw people who would go up to have their infirmities prayed over by  other church members or their preacher, all of whom sincerely believed that laying on of hands and praying would help  — if it were God’s will and they had faith.   The Faith Healers of Randi’s book, however, are  cynical con artists.    Randi investigated as many of the major grifters he could — Peter Popoff and W.V. Grant have especially large sections —  and not only does he expose the tricks these men used to pretend, but he discovers even their faith is fraudulent.

What are some of the tricks of the trade?    The ambitious faith healer should avoid praying for people with physically obvious problems, like missing limbs:    convincing the faithful is a mind game only possible when their maladies are inside, where  feelings of euphoria can overwhelm the discomfort or pain for a while.  Heart problems  and cancer are excellent candidates for faith-healing. (Just don’t urge the person you’ve “healed” to run up and down the aisles. One person documented here was told to do that by the preacher and immediately collapsed.)    Healing the blind is  easily possible, so long as they’re only legally blind and the audience doesn’t know that: do the prayer shtick, ask them how many fingers you’re holding, and voila!     You can announce to the radio-listening world that you’ve thrown away their dark glasses and white stick when they never carried them to begin with!   Several preachers here use the tactic of having people who didn’t need wheel chairs to begin with sit in them during the service, and they were then commanded to rise and walk.  Oooh, ahh, such miracles. The wheelchairs were owned or rented by the preacher.

But what about the faith healer’s “psychic” abilities,  their being informed by the “Word of Knowledge”? How did faith healers working a room know so much about people  — their names, their maladies?  Well, those people told them. Not the preachers themselves,but their staff. Maybe they talked to a volunteer as they were finding their seat, who recorded the information and passed it on; maybe they filled out a prayer card that was also sent to the back.  Some preachers would memorize the information through mnemonic tools; others, like Popoff, were lazy and just had their wives feed them the information through an in-ear transmitter.   Others were cold readers, or just held mass meetings and did the shotgun approach. (“Someone is being healed of stomach cancer RIGHT NOW! There’s a Helen in the balcony with a thyroid condition — God is touching that RIGHT NOW!” etc).

Randi has previously impressed me as a lecturer —  interesting, amusing, and warm — but his investigation here  impresses on its own. Randi and his staff attended numerous services,  tracked down people who had gone or who were healed and talked with them; they interviewed past and present members of the preachers’ staffs; they donned false uniforms and infiltrated the buildings where healing crusades were being held, so they could  see what was going on backstage; and  they even took home trash bags to sort through them. All this bears fruit — the discovery of radio transmissions, the finding of crib sheets used by the preachers to find their “high value targets”,   and  the revelation of some interviewees that the “preachers” often have a stage persona wholly different from their real one, and Grants’ Christianity seemed to be limited to his performances.

The most incredible thing about the Faith Healers is that no matter how many people go away dissatisfied from their services, how many people go bankrupt feeding these parasitical pretenders with “love offerings”, how often they are exposed as frauds,  how obviously profit-driven they are…..people still keep coming back.  One of Randi’s interviewees suggests that people want to be fooled. They know it’s a fake,but they want to believe.   Randi also reflects on the limits of medical knowledge, and how ominous diseases like cancer that seem beyond a cure are at least countered with hope from the profit-seeking prophets– if only for a little while.     For his humane approach to understanding the victims, and his dogged attack on their predators, Randi’s work deserves high praise indeed.

Citizen, librarian, reader with a boundless wonder for the world and a curiosity about all the beings inside it.
View all posts by smellincoffee →
This entry was posted in history, Reviews and tagged skepticism. Bookmark the permalink.

4 Responses to The Faith Healers