The Limits of Partnership

The Limits of Partnership: U.S.-Russian Relations in the 21st Century
© 2014 Angela Stent
384 pages 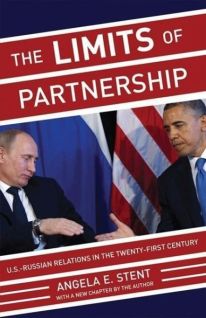 The Limits of Partnership examines the Russo-American relationship through four presidential administrations,  reviewing what progress was made  or conflicts each American executive had with his Russian counterpart. Stent offers that the main problems between the United States and Russia have been fairly consistent from Clinton onwards,  and that part of the problem is that each power ultimately wants different things out of the relationship.   While the United States wants Russia to mostly confirm to the ideal of western democracy, Russia wants to reclaim its prestige as a great power

The Limits of Partnership begins on a high note, as the Soviet Union disappears overnight during the tenure of a very seasoned foreign policy executive: George H.W. Bush.  The elder Bush knew that at this extraordinary moment, when the decades-old adversary had suddenly collapsed into  smaller states very unsure of themselves, that care had to be taken not to humiliate Russia’s new leadership, but rather encourage them.  Most of Russia’s weak transition years unfolded during the administration of Bill Clinton, however, and there some issues that would dog the relationship for decades appeared. The most pervasive source of conflict was colliding interests in the “new independent states” of the former Soviet Union.  The United States was keenly interest in welcoming post-Soviet states into the community of liberal democracies, and sometimes stepped on Russia’s toes as both competed for influence in the “new Europe”.    Russia, of course, resented the sudden insertion of their old rivals into what used to be part of the Union,  an area they still referred to as “the near abroad” to differentiate it from actual foreign countries.  This was especially so during the Kosovo crisis, when Russian troops on he ground were nearly attacked by NATO forces attempting to secure an airport; only alleged insubordination kept the attack order from becoming reality and initiation a full-scale conflict.

Although the Bush administration initially hit it off with Putin, and were encouraged by the Russian president’s early and fulsome vow of support in the 9/11 aftermath,  Bush’s “Freedom Agenda combined with Russia’s desire to maintain influence in the old Soviet Union put the two nations again and again at loggerheads. At this time, Putin was also becoming….well, Putin, consolidating his power, getting the state into position to better profit from mineral resources, and making the Russian Federation a distinctly more top-down government.  Although Putin had facilitate the creation of US bases in  central Asia to allow for the US invasion of Afghanistan,  the subsequent invasion of Iraq  derailed every attempt of progress; Putin joined the leaders of Germany and France in not only not supporting the toppling of Hussein, but working within the UN to officially chide the US. The arrival of Barack Obama saw a more cautious approach to Russia; Obama was a critic of the Iraq war himself, and wasn’t trying to rid the world of evil by making everyone democratic.  At the beginning, Obama was even able to enlist Russian support in moving troops in and out of the area — but quickly enough, the initial warm period would give way to constant problems, again relating to Russia’s desire to control its immediate neighborhood  — only, during the Obama administration,  Putin’s efforts had manifested themselves in actual military interventions in its neighbors,  one which set alarm bells ringing from the Caspian sea all the way to DC.

In connection with the “near abroad” problem were those created by the the emergence of the United States as a solitary superpower. In the Clinton years, the state department made subtle organizations that effectively demoted Russia’s importance: instead of having its own department, it merely had a section within a larger Eurasian one. The US also ended its involvement in several treaties that were deemed to be no longer necessary,   which was regarded by Russia’s own government as a sign that the United States didn’t take it seriously as power.  Resentment over this loss of status was made far worse after the unilateral invasion of Iraq, which — like increasingly many affairs in central Asia — was done without Russian consent.  The United States’ increasing involvement in the mideast, and its concerns over regional powers like Iran,  also saw the growth of military bases and missile installations — and  much worse, for Russia, NATO invitations to its neighbors. What had NATO been formed for,  other than as a counter to Russia?   Although early on independent Russia had sought engagement with NATO,  and there had been an idea that it could even join that defensive alliance,  increasingly  Putin  — strengthened by rising oil prices,  supported by Russians who regarded him as a return to glory-  sought an independent course for Russia, one in which it did not move closer to the west as was hoped, but rather followed its own path.

The Limits of Partnership is a very helpful history of relationships until late 2013, although there were substantial developments in the years that followed — the debacles of Syria and ISIS, for instance, the midnight expulsion of Russian diplomats during Obama’s administration, and the revelation that entities within Russia had been manipulating social media chatter to stir up trouble.   It seems more unlikely than ever that America and Russia will establish a fruitful working relationship, but given how personality-fixed Putin’s Russia is, once he retires, things may change, and the growing  global influence of India and China may change that entirely. It may be that instead of Russia brooding over the loss of a bipolar world, it has to learn to adjust to an entirely different one.

Citizen, librarian, reader with a boundless wonder for the world and a curiosity about all the beings inside it.
View all posts by smellincoffee →
This entry was posted in history, Reviews, World Affairs and tagged Barack Obama, geopolitics, history, politics, Politics-CivicInterest, Russia. Bookmark the permalink.

5 Responses to The Limits of Partnership