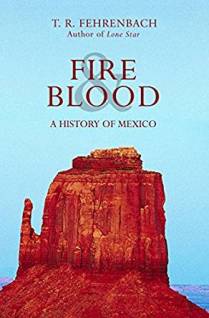 Fire and Blood is an epic history of Mexico, one that begins at the dawn of time and takes its time moving on.  Case in point: the 20th century is addressed in the last 10% of the book.   If nothing else, Fehrenbach should be lauded for a historical survey that focuses more on the past rather than the recently-expired present.  Fire and Blood is dauntingly comprehensive, taking no shortcuts; not only are the cultures of the Aztecs and Maya plumbed, but when the 16th century arrives Fehrenbach pauses to render a history of the Spanish empire, and readers are continually fed with changes on its evolution as they affect Mexico.  The arrival of the Spanish is a pivotal moment,  as they destroyed the old tribal order — and imperial order, while easy to declare, was  harder to realize.  A dominant theme within the book is a search for Mexican identity, and it begins with the Spanish disruption.  Spanish authorities organized their new domain into a multitude of racial castes, with varying privileges and duties depending on whether one was a Spaniard born in Spain, a Spaniard born on the peninsula, or racially mixed in some way. Over time, and especially after the Spanish empire collapsed of its own corruption with Napoleonic assistance,  the mixed Spanish-and-Native population was dominant,  but even so Mexico still writhed trying to create social, economic, and political order for itself. Some wanted a republic, some a monarchy; some wanted to destroy the Church utterly, some to embrace it.  Struggles over land a la the brothers Gracchai also drove politics.  All this turmoil tended to produce autocratic leaders, not principled democrats,  and even once democracy had established itself one political party held sway.

Prose-wise, Fire and Blood is approachable history; the history itself, however, as the title indicates, is harsh, unforgiving, and often violent.  It took me several weeks to finish, with frequent breaks,  because the constant strife seemed relentless.  The content an style make this a valuable resource for those interested in learning about the roots of Mexican culture, however.

Citizen, librarian, reader with a boundless wonder for the world and a curiosity about all the beings inside it.
View all posts by smellincoffee →
This entry was posted in history, Reviews and tagged 2018 Peoples of the Americas, Central America, Hispanic, history, Mexico, Peoples of the Americas series, Spain. Bookmark the permalink.

6 Responses to Fire and Blood