At some point in 1997 I saw this cover in a now-defunct WaldenBooks and was intrigued, both by the shoes and that oddly simple title: “DUCKY”.    The book was a fictional diary, rendered in a font-like handwriting, and it was part of a series of  journals by five fictional kids — four 8th grade girls and one 10th-grade guy —  that I would become so enamored with that I finally developed a journal-writing habit of my own,  though there have been serious lapses since college. The series is special enough to me that it has survived, along with Roswell High, as part of my collection when the other books of my youth — Goosebumps, Animorphs, Wishbone, the Boxcar Children books — have passed away as donations or gifts .

The series begins when the eighth grade class of Vista  is moved to the high school building of their school to account for a surge in enrollment. Although middle school is already a time of transition, the kids’ exposure to so many older, near-adult students accelerates their own development as they encounter new influences.  Each of the teens brings their own private struggles with them, but they experience things together as well.

The characters, introduced as I met them: 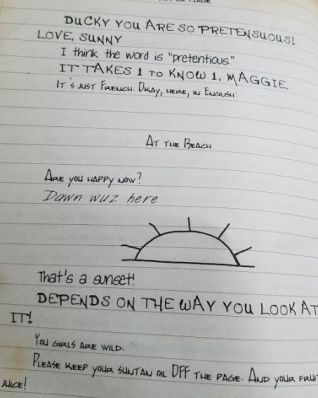 Each character’s “handwriting” is rendered in unique fonts, and each have distinctive ways of writing — Ducky writes his in the second-person perspective,  Amalia writes into her book as if she were talking to someone named “Nbook”,  and Maggie — the perfectionist —  types hers, although readers still see her handwriting when she drafts and revises poems and song lyrics.  (She has  a line in the picture above, “I think the word is ‘pretentious'”.  Maggie isn’t the only one whose creative talents are part of the journal: Amalia is an aspiring graphic artist and often illustrates scenes from her life.    The series of fifteen books takes us through each person’s journals three times,  beginning with Dawn, ending with Ducky, and then wrapping around again.  (It’s not a bizarre coincidence that all five characters keep journals: their school requires it of students beginning in elementary classes.)  The above picture is unusual in that it puts several characters’ handwriting in the same book:  Ducky is driving to the beach and the girls are scribbling their greetings in his notebook. Only Amalia is missing, because ’72 Buicks only have so much room.  Each of the fifteen diaries covers roughly a month or so.

While I’ll be reading the series this next week, I won’t be doing reviews for the books in part because they’re so little (100 pages each, or thereabouts), I may muse a bit at the end on how the story has aged.

Citizen, librarian, reader with a boundless wonder for the world and a curiosity about all the beings inside it.
View all posts by smellincoffee →
This entry was posted in Reviews and tagged Children-YA. Bookmark the permalink.