How Adam Smith Can Change Your Life

Posted on March 6, 2018 by smellincoffee

How Adam Smith Can Change Your Life: An Unexpected Guide to Human Nature and Happiness
© 2014 Russ Roberts
269 pages
\ 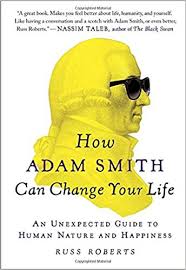 An economist and a rabbi walk into a bar and co-author a work on the meaning of life. That’s not the opening line to a joke, but a near-description of How Adam Smith Can Change Your Life. This little book gives a modern interpretation of Adam Smith’s Theory of Moral Sentiments, girding it with references to Rabbi Hillel. The contents are surprising, if your association of “economist” is with strictly matters financial, like stocks and trade deficits. Ironically, writes Russ Roberts,  the subjects economists are consulted most on, like the future health of the global economy, is what they’re worst at doing. The heart of economics as originated by Adam Smith is behavioral, however, judging how people use their scarce resources to make the best life possible for themselves — both as individuals, and with other people. The same desire for understanding that Smith applied to humans at the level of nations in The Wealth of Nations is applied more intimately to individual persons here. What do we really want?

The answer isn’t money, though it can help. The Theory of Moral Sentiments contends that what people want most, what actually makes us happy, is to be loved and lovely.  This isn’t about romance or aesthetics; Smith’s use of love encompasses respect, admiration and affection. “Lovely”, too, also has a deeper meaning: it is to be worthy of respect, admiration, and affection. People not only want to be held high in the esteem of others, but they want to have earned that place. Part of Smith’s argument is that each of us has an Impartial Observer in our heads, an ethereally human figure who is constantly watching, judging, and arguing with us.  A conscience, so to speak, a means through which we can evaluate our own actions  or behavior from an outside perspective, to see ourselves as we are being seen.  This conscience is not perfect — it can be lied to and argued with through justifications of our behavior — but unless its voice is smothered and distorted by our own willful actions, it is invaluable. We can strengthen the observer by reflecting on the behavior of others — when we see them acting irrationally, we can turn our analysis on ourselves, to see  that behavior which we dislike present in our own actions.  We can use this impartial observer to help not fool ourselves, to help us become lovelier — and so, loved. The impartial observer rings a bell for me in part because of past readings into primate social behavior, particularly the fact that chimpanzees and such will often act in private in ways that strongly imply they are imagining what the consequences of their being caught in unsocial behavior would be.  I suspect that this observer  is some kind of internal-audit tool of our socially-oriented brains, useful for anticipating how our behavior will be interpreted by others.

Students of schools of Greek philosophy like Stoicism — which regarded moral excellence or virtue as its own reward — will recognize the ‘virtue’ of Smith’s loveliness straightaway.  Epicureans, who regarded simple pleasures as the key to the good life, will also find an ally in Smith, when he asks: “What can be added to the happiness of a man who is in health, out of debt, and has a clear conscience?”.  Smith regarded the chase for fame, power, and gadgets and goods as self-defeating. These itches are insatiable, leading us to constant torment as we try to reach greater and greater levels. Even those who reach the top must find it a hollow victory, judging by the inner lives and outer behavior of celebrities, politicians, and such.  If we understand our core desires, however — this yearning to be loved and lovely — we can be conscious of when we are attempting to fill the real need with ersatz praise,  in admiration for our things rather than ourselves.

Those who have an interest in human flourishing will definitely find this little book worth their attention.

Citizen, librarian, reader with a boundless wonder for the world and a curiosity about all the beings inside it.
View all posts by smellincoffee →
This entry was posted in Reviews and tagged philosophy, Russ Roberts, virtue. Bookmark the permalink.

10 Responses to How Adam Smith Can Change Your Life