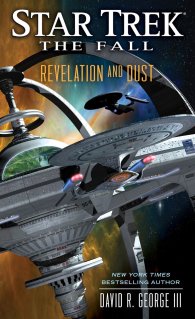 David R. George takes a bullet for the team in The Fall: Revelation and Dust. First in a five-part series with five participating authors, Revelation and Dust largely consists of recap, introduction, and assassination. Well, something had to happen, right? There’s four books after this, so something extraordinary had to hook us for the rest. We’ve had the Borg invasion, we’ve blown up Deep Space Nine already, the Dominion are SO yesterday, and the hostile takeover of the Federation by the Ferengi Alliance is unlikely. So, gunshots it is.

At the end of George’s DS9/Typhon Pact duology, Deep Space Nine was blown up with the lost of most of its hands.  Two years later, the station has been rebuilt, this time as a proper  deep space installation instead of an ore-processing plant turned command post. Its formal opening coincides with the two year anniversary of the old station’s destruction, and now the gang is back together to pay respects to their fallen comrades, and their now-vaporized home.  Tensions from the previous Typhon Pact novels — Sisko’s estrangement from his wife Kasidy,  Bashir and Dax’s falling out over Bashir’s determination to destroy Section 31 from the inside — are buried, making room for new and exciting arguments.The novel largely follows the characters as they make their way to the station and renew old acquaintances, musing over the good times until the speeches and gunfire start. Part of this catching-up is an unfortunate series of chapters that re-uses a plot device from one of the early Relaunch novels:  readers are subjected to completely new characters in some quasi-fantasy setting involving a tribe called the ‘Bajora’.  As with last time this is an extended vision effected by the Prophets,  because the mystical goings-on here translate parable-like to something “real” that has happened . The upshot of this thread seems to be that Sisko can have his life back from Prophets.  He can  have his family and they won’t kill him. Yay. In any case, I don’t want to read about random fantasy Bajorans, I want to read about President Bacco. She’s always fun.

George’s previous DS9 novels have all been great reads, but this one is lacking…story. This is essentially a Star Wars scrolling text intro, expanded to 400 pages.  See for yourself!

Citizen, librarian, reader with a boundless wonder for the world and a curiosity about all the beings inside it.
View all posts by smellincoffee →
This entry was posted in Reviews and tagged Deep Space Nine, DS9 Relaunch, Star Trek, Star Trek the Fall. Bookmark the permalink.

4 Responses to Revelations and Dust