Posted on November 18, 2017 by smellincoffee

Ever since I returned from New Mexico last year, I’ve been trying to see more of Alabama’s own wonders. To that end,  I decided to spend a weekend in northern Alabama, using Decatur as a base camp,  to see various locales in that area of the state.   My list included two natural attractions, visiting two cities I’d never seen before (Decatur and Florence), and trying Persian food for the first time, as Huntsville has the only such restaurant in the state. 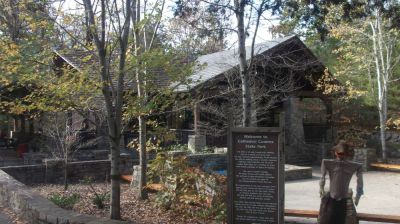 Cathedral Caverns is located a half-hour or so east of Huntsville. According to the tour guide, the cave was ‘discovered’ in the 1950s by a man named Jay Gurley, who bought the property and quit his job so that he could explore the caverns and make it possible for tourists to visit it.

Cathedral Caverns has the largest entrance of any commercial cave in the world, so it’s hard to believe it took so long for settlers to notice it.  The native tribes had noticed it, of course; excavations around the entrance immediately turned up arrowheads, spears, and other assorted artifacts.  Our guide didn’t tell us what tribes the artifacts were thought to belong to, but given the region they could have been Chickasaw or Cherokee. 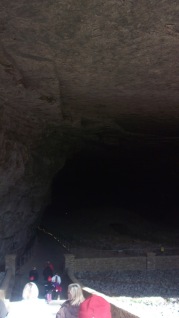 Access to the cave is limited; visitors may only enter in the company of a tour guide.  This differs from Carlsbad Caverns, which is open-access.  The cave has some major formations of interest: a gigantic column called “Goliath”, which is much larger than the Hall of Giants’ titular giants; a massive flowstone wall hailed as a Frozen Waterfall; a cathedral like room complete with pipe organ stalagmites;  and obvious signs of ancient marine line, from sharks teeth embedded in the ceiling to the ancient remains of sponges and crustaceans lining the walls. (These had some weird name that sounded like they were from Harry Potter, and I haven’t been able to remember it exactly. It sounded like “snart noggles”.)

Bridge left over from the original trails. I wonder how long it’s been since that was load-tested?

Flowstone
My camera remains not up to snuff as far as cave pictures go, but my coworker/traveling amigo had better luck:

In the cathedral room.

The tour lasted for just over an hour, with a good pace and an appreciated mix of historical and scientific information.  I was concerned that anything after Carlsbad Caverns would be “meh”, but  the grandeur here made its own mark.  As you can see here, the walkways are wide and (after the entrance) fairly level. There are a couple of spots that would require some care from someone in a wheelchair or stroller, though.

Citizen, librarian, reader with a boundless wonder for the world and a curiosity about all the beings inside it.
View all posts by smellincoffee →
This entry was posted in Reviews and tagged TW on the road. Bookmark the permalink.