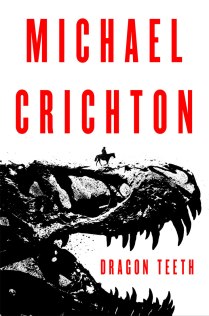 Scientific discovery isn’t always a gentlemanly affair.  Dragon’s Teeth, published by the estate of Michael Crichton in his name, inserts a fictional character into the real-life feud of two paleontologists who went to such lengths to undermine the other that their rivalry was given the name “Bone Wars” and documented in books like Great Feuds in Science.    William Johnson, our main character, is an unwitting participant in the Bone Wars who signs up with Professor Marsh of Yale on a bet; he will join Marsh’s summer expedition out west or forfeit $1000, no small sum in 1876.   Suspected of being a spy for Marsh’s nemesis, Edward Cope,  Johnson is abandoned in Wyoming and forced to throw in with the man he’d been told to despise and fear.  That summer would see him help discover the first evidence of a “Brontosaurus”, and later attempt to get the bones back to civilization despite being on the front lines of the Indian wars, with nearby towns like Deadwood scarcely more safe.  Although Dragon Teeth is not a typical Crichton novel,  it is a western adventure with a science twist.  The emphasis is on western adventure, however; Wyatt Earp is an important character in the second half of the book, and the story overall is one of a soft ‘down-Easterner’ learning how to be a man — a real man, a man of the west whose hands are hard with work, aiding a mind quick enough to outwit gunslingers, avaricious treasure hunters, and lying dames.  Not your typical Crichton, but it’s a fun combination of cowboys and dinosaurs.