The End of Civilization, or the story thereof

Seven years ago, I began reading Will Durant’s epic  Story of Civilization series.  I use ‘epic’ deliberately, for each of the eleven volumes in this series neared a thousand pages, and they covered not just politics but every aspect of the period: philosophy, literature, art, music, religion, economics, statecraft.   After a prodigious beginning (three volumes in 2010, four in 2011), I slowed down dramatically; I read The Age of Reason in 2012, and The Age of Voltaire only in 2014.  Only this year did I dive back into the series with Rousseau and Revolution, and now (just recently) The Age of Napoleon.

What have I learned from this study of civilization?   Durant planted two seeds very early on that have taken root in my mind; and while they don’t form my thinking, they do shade it.   The first is that history is more cyclical than progressive, that civilizations flourish and then wither, being replaced by others.  Rome is the all-too-obvious example, but think also of Spain or Austria: once the world trembled before them. On the grand scheme, humanity as a whole can progress, but only if knowledge and traditions are passed on from one civilization to another; think of the Arabs becoming the inheritors of Greek knowledge via the Byzantines, and later passing the baton to Europe.

Durant’s estimation of civilization is not material progress, however, any more than Kenneth Clark’s is. In his first volume he also introduced a dichotomy between ‘stoicism’ and ‘epicureanism’, and maintained that societies are born in stoicism, and then ripen and decay in epicureanism.    This is not in reference to the Greek schools of thought, but rather to moral attitudes. The stoic beginnings were called such because they emphasized virtue, discipline, and and asceticism;  the epicurean ones emphasized pleasure and freedom.  In Durant’s view, what typically happened is that older civilizations flowered in art or goods, but began to decay socially;  they were eaten alive or invaded or otherwise supplanted by younger,  more virile, and more puritanical cultures.  Durant doesn’t approve of either one of these phases; they are merely the death and life of civilizations, and seemingly inevitable. He notes that personally, he would rather live in the fatal flowering of an epicurean age.

Durant also believed that religion was an essential aspect of any culture to bind it together and create a common morality — nearly any religion would do, and he saw in the post-enlightenment age  an attempt to create a ‘civil’ religion that would suffice, with the state in the stead of the gods.  The social-structural importance of religion is not an unusual opinion among historians — see Christopher Dawson or Edward Gibbon. It’s also one suggested by Robert Wright in The Moral Animal, and noted by Michael Crichton.  Even if formal religion is vanquished,  other forms of belief materialize: in The Enemies of Reason,  several celebrity skeptics bemoaned the rise of horoscopes and ghost-belief in supposedly secular Europe.

Finally, I have gained an enormous respect for the Durants.  The amount of research conducted over forty years is astonishing enough, even moreso considering the gifted pen with which they wrote.  What most impressed me, however, especially from the medieval volume onwards, was the Durants’ ability to understand and fairly present issues from opposing quarters.  Consider, for instance, the dialogue in The Reformation between a Catholic, a Protestant, and a humanist.  The same convivial spirit is seen as new factions war with each other for control of society, like owners of capital and labor, or traditionalists and reformists.  Many a great man is lauded here, but the poor  are ever given voice.. Durant quotes from Edmund Burke and Karl Marx alike.  I assume the Durants’ sympathetic insight was the result of their long, patient survey of humanity as a whole. It is a mark to aspire to.

THE STORY OF CIVILIZATION 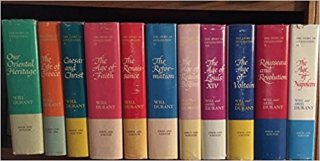 Our Oriental Heritage
This covers prehistory,  and the usual litany of Fertile Crescent civilizations: Babylon, Egypt, Persia, and so on, in addition to India, China, and Japan. This first volume is the most unusual in the series in that it reflects Durant’s original intention to cover the entire sweep of civilization: he realized early into his research that such an undertaking was far too vast considering that he was committed to a ‘full’ history of politics, economics, arts, literature, religion, music, etc.    Oddly, then, this volume covers the eastern nations all the way up to the 1930s, when Japan was poised to plunge the Pacific into war.

The Lives of the Greeks
I was especially obsessed with the Greeks at the time of my reading this, but only remember being grateful for the exposure to so much Greek literature through the volume.

Caesar and Christ
Most memorable for Durant’s tepid appreciation of the Romans, who contributed little that was new to the human experience.  A quotation from this has stuck with me ever since: power dements more surely than it corrupts.

The Age of Faith
The largest in the series,   the Age of Faith  stalled me two times before I was able to make it all the way through. I did not expect to enjoy the age of faith; while Frances and Joseph Gies had disabused me of the worst conceits modern readers have about the medieval epoch,  I began as a hostile audience.  But as Durant pored over medieval Europe,  the Byzantines, Persia, and the dawn of Islam, I found myself drawn in.  Incredibly, The Age of Faith remains my favorite volume in the series.

The Renaissance
When I began the series, I looked forward to the Renaissance and the Enlightenment, for then I followed the star of Human Progress. Durant’s volume was heavy with Italian politics, but there were a few artists I encountered here for the first time.

The Reformation
What I remember most about this book is the enormous role played by Charles V in the Reformation, and Durant’s talent for exploring multiple sides of an argument, as he did in an ending dialogue between a Catholic and a Protestant.

The Age of Reason Begins
700 pages of religious and other wars, which Durant argues paved the way for more toleration later on when people were exhausted by the bloodletting. I was certainly exhausted reading all of the gore.

The Age of Louis XIV
An interesting era; England becoming more of a constitutional monarchy, with the House of Commons emerging as a power; France doubles-down on absolutism, and Peter the Great attempts to westernize Russia.

The Age of Voltaire
The Enlightenment is really beginning to form, with Newton and Voltaire both appearing.  There was a two and a half year gap between my reading Louis XIV and moving on to this, and as I read the reviews there’s a noticeable cooling in my regard for radical change.

Rousseau and Revolution
The  dawn of Romanticism, but a very slow one. I read this one only recently, so I remember much about it — the debate between Rousseau and Voltaire, and the many towering personalities like Frederick the Great, Catherine the Great,  Bach, Schiller, etc.

The Age of Napoleon
Through Durant I was able to remedy a long-standing weak spot for me: Napoleon.  Durant not only covers his political rise and his imperial-military career, but discusses at length the arts and sciences through his reign.   The Durants are critical admirers of the Emperor, viewing him as a man unique in European history.

Citizen, librarian, reader with a boundless wonder for the world and a curiosity about all the beings inside it.
View all posts by smellincoffee →
This entry was posted in Reviews and tagged Story of Civilization. Bookmark the permalink.

4 Responses to The End of Civilization, or the story thereof