The Tragedy of Liberation 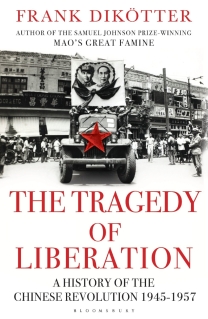 Readers who approach Frank Dikotter’s histories of Maoist China (The Tragedy of Liberation, Mao’s Great Famine, and The Cultural Revolution) should brace themselves going in; like  books about the holocaust, or obscenities like the rape of Nanking,  the sheer amount of human misery is overwhelming.  The Tragedy of Liberation opens at the close of World War 2,  in which China became an area of contention not only between the Nationalists and the Communists, but their respective allies – the United States and China.   After documenting the rout of the Nationalists in that context, Dikotter then takes readers through the early 1950s, and first years of Communist rule as the new party-in-power ruthlessly imposed its will and went to work creating the New Sino-Soviet Man.

As Forgotten Ally indicated, Communist China was a creature formed from the Second World War.   In that book, Rana Mitter noted how the war wrecked Nationalists credibility by their heavy-handedness, and execution of desperate measures like blowing dams to slow down the Japanese. Here, another aspect of the war’s contribution to Mao’s triumph is documented;  we find the Communists being supported by the butcher Stalin, given direct aid by him as well as help in corralling and putting to use Japanese military equipment abandoned in northern China. Chiang Kai-Shek found increasingly little support from the United States as the Japanese retreated, as Truman’s intelligence indicated that the Communists were nothing but isolated bands of guerrillas in the extreme north.

The Communist takeover is told in various chapters of misery.  We begin with the almost-immediate economic implosion, as taxes and legislation imposed such a burden on shops and larger businesses that they practically disappeared.  The  countryside  fared no better, subjected to rapidly increasing control of the farms by the state.  As the farms became progressively worse-managed, they produced less food and hemorrhaged labor.  Production declined for many reasons, two being the supervision of services or tasks by politically appointed incompetents,  as well shoddy care given to communal work, including maintenance of vital tools and the land. But a production crisis at a factory is merely a loss;  a production crisis in farms, in a country that has closed itself off to foreign trade, is famine and death.

Matters grow worse. I referred to The Rape of Nanking earlier; that’s not an accident.  If Mao called for a hundred flowers to boom in China, they had plenty of fertilizer.   The amount of people murdered by  Mao’s Communist party, either directly or at its prompting, bewilders the mind. The numbers don’t register.  Land owners,  peasants, those accused of being close to foreigners, those who fail express sufficient enthusiasm for the Party and the New Democracy — they are only the beginning of a slaughter not seen in Asia since the Khans.  what began as a state sanctioned punishment regime against ‘class enemies’ widened into murderous chaos. The slaughter of innocents by those in power is one matter, however;  the culture of death, degradation, and denunciation which grew as a result of the Party’s enthusiasm for murder is another subject altogether.   Readers of Roman history may remember how the proscription lists of Sulla’s time, in which people were denounced and declared outlaw by the regime — their lives and money forfeit. This occurred in China on a grand scale, as neighbors looted one another. The society itself became tyrannous, as everyone began policing everyone else’s actions, in which the slightest flaw might lead to a death sentence.   Dikotter grimly notes that the Chinese of Mao’s time didn’t have freedom of silence,  let alone freedom of speech: those who failed to say the right things were marked. Even when Mao seemed to relent after the death of Stalin, encouraging dissent, deadly pushback followed.

The Tragedy of Liberation makes for haunting, sobering reading.  I’ve known that Mao’s regime was deadly for years  — deadlier even than Stalin’s, who put Hitler to shame — but to know something in the abstract, and to have the bodies placed before the mind’s eye, are different.

Citizen, librarian, reader with a boundless wonder for the world and a curiosity about all the beings inside it.
View all posts by smellincoffee →
This entry was posted in history, Reviews and tagged 2017 Discovery of Asia, Asia, China, collective tyranny, Frank Dikotter, history, Man vs State. Bookmark the permalink.

5 Responses to The Tragedy of Liberation