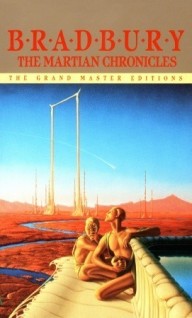 As the 1940s began giving way to the 1950s, Ray Bradbury began penning a series of stories about the future human exploration of Mars — stories that he thought of as fantasy in his letters, but which were called science fiction by everyone else. The stories were re-published as an integrated novel, the result is more of a mosaic than a straightforward tale.

Th Chronicles do not present a rosy, optimistic view of Mars exploration — or of the future in general. Although arriving on Mars safely is a considerable challenge for the Earthmen, eventually Earth triumphs in the same way it survived a Martian invasion in H.G. Wells’ earlier work, and the same way Europeans came to posess a widowed continent. One of Bradbury’s characters, Spender, could be an Ed Abbey in space — gazing at the ancient beauty of Mars, of the sad ruins of a once-great civilization — and lamenting that one day settler would arrive like locusts and devour all of this, plonking down hot dog stands. “We have a way of ruining big, beautiful things,” he says, shortly before going on a shooting spree against those who would chuck wine bottles into the pristine Martian canals. Mars is settled, and emptied, as Earth’s cold war finally waxes hot and all colonists are called home to fight — an odd and tragic development, considering the war’s nuclear nature.

There’s more to the Chronicles than environmental concerns and nuclear dread, however. In another story, “Usher II”, Bradbury introduces a theme later expanded in “Fahrenheit 451”, when a man builds a house of horrors inspired by the works of Edgar Allen Poe. The house is a tower of rebellion, for on Earth all works of fantasy and politics were long burned and their ashes buried, in the hopes of burning and burying imagination and discontent with them. The political police catch up to the house’s architect, but he invites them to tour the house just once before they burn it. The vengeance then wreaked through recreations of Poe’s stories testifies to a delicious anti-authoritarianism, a contempt for those who would control the lives of others for them. Many people came to Mars to escape conformity, bureaucracy, the sterile life — but found it came following after them, like the Alliance in Firefly.

And yet there is more to this little volume of stories. Needless to say, after spending an evening with it, I now know why it’s held in such high regard.

Citizen, librarian, reader with a boundless wonder for the world and a curiosity about all the beings inside it.
View all posts by smellincoffee →
This entry was posted in Reviews, science fiction and tagged Ray Bradbury, science fiction, vintage SF. Bookmark the permalink.

5 Responses to The Martian Chronicles