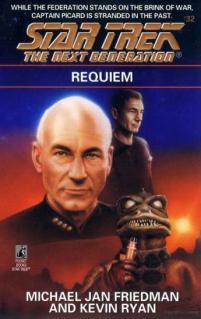 One hundred years ago, James Kirk of the USS Enterprise arrived at Cestus III to find a Federation colony in flames,  virtually all of its residents destroyed by mysterious attackers.  Kirk soon found himself in direct physical conflict with the attackers, a race of dinosaur-like creatures called the Gorn.    Kirk was able to find a way to conclude the Cestus affair without further bloodshed, and diplomatic overtures followed many decades later. Now, as the Federation and the Gorn try to keep the peace, the Federation’s most experienced negotiator is lost — lost on Cestus III.

Although Requiem begins with a flashback, Picard isn’t lost in the memory of Gorn training scenarios, the historical record, or even his own experience with the Gorn as captain of the Stargazer. He is literally marooned in time, thrown to Cestus III four days before the deadly attack by a mysterious alien artifact in space. (When will Starfleet learn that mysterious artficats floating in space never lead to GOOD things?)    Picard is atonished by the coincidence: on the verge of restoring Federation-Gorn relations, he’s been thrown to their beginning? He’s also riven in conflict: while he knows he can’t fight history, can’t warn the colonists, their experimental power station is on the verge of destroying them in way. Worse yet, having been rescued by the colonists after he was transported through space and time into the middle of a landslide, he has a growing personal attachment to the colonists — and while he’s having moral crises and trying to pass himself off as Dixon Hill,  Merchant Captain and Totally Not a Spy,  Riker is being badgered by Starfleet to produce Picard and get to Gorn, pronto.

I thoroughly enjoyed Requiem, though Friedman and Ryan never explain why it is the Mysterious Alien Artifact threw Picard to, of all places, Cestus III on the eve of the Gorn attack.  Since we have seen other artifacts that can transport users to variety of places in time and space (the Guardian of Forever, for instance), perhaps this is another one — one that is guided by the ‘user’s’ thoughts. Perhaps when Picard activated the time-transport, his thoughts were on Cestus III — hardly surprising given the impending negotiations.   “Arena” is one of my favorite TOS episodes, and so this look at the colony before its destruction succeeds for me. The ‘b’ plot also features Ro Laren being appointed acting first officer, and the book ends with Kirk and company arriving and “Arena” beginning.

It’s got the Stargazer, Kirk, Ro Laren, and the Enterprise-D. What more do you want?

Citizen, librarian, reader with a boundless wonder for the world and a curiosity about all the beings inside it.
View all posts by smellincoffee →
This entry was posted in Reviews and tagged ST TOS, Star Trek, The Next Generation, Warp Speed Discard Challenge. Bookmark the permalink.