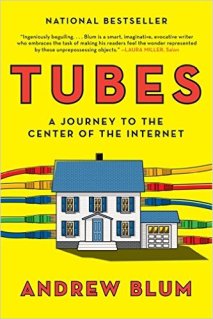 It turns out Ted Stevens was right: the Internet really is a series of tubes, connecting large boxes, and usually in nondescript warehouses that look like self-storage units.  Inspired by a squirrel depriving him of Internet by nibbling on his wires, Andrew Blum decided to investigate the physical infrastructure of the Internet.  The journey took him across the United States and into Germany and Britain, where he discovered that the internet is corporeal. Across the world are businesses devoted solely to housing space where regional networks can directly tie into one another.  Tubes gives a slight sense for how the internet developed, visiting the university where the first connections were made, and then the first commercial network center.  However ethereal the internet may seem to regular users — a mysterious force that binds and penetrates our computer?  — it is given life by not just the creative energy poured into it, but the physical substructure — routers, wires, warehouses, tubes, and cables.  It’s awe-inspiring to think that there are companies whose physical property literally wraps around the world, providing redundant connections in case of an earthquake, although after reading it I’m still a foggy how on all this is done. How do routers know where to send information?   At some level, even the people running the networks aren’t fully aware of their mechanics because there’s so much information to channel. When it comes to data storage, for instance, different bits of a given video could be posted in multiple data centers. It’s rather like the hydro engineers in On the Grid not being able to tell exactly how water got to a specific neighborhood; there are too many possible paths   Blum’s goal of visiting ‘monuments’ of the internet, some of the most pivotal spots —  Google’s data centers, treated with Area 51-type secrecy, the point where the first cable connected New York  and London, the aforementioned networking warehouses — provides general milestones, but they’re disjointed.  If you’re really into the internet and its history, it makes for mildly entertaining reading, but the pieces remain disconnected.

Citizen, librarian, reader with a boundless wonder for the world and a curiosity about all the beings inside it.
View all posts by smellincoffee →
This entry was posted in Reviews, Uncategorized and tagged goods/services, history, infrastructure, internet. Bookmark the permalink.