Posted on December 23, 2015 by smellincoffee 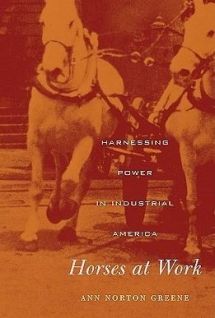 The quintessential image of horses in American history is the cowboy, of rough men moving cattle in the wilderness on horseback. But follow the cattle, and their destination is invariably the cities, for cowboys were actors in the industrial economy, moving cattle from ranches in the prairies to the railheads expanding throughout the west. Horses and industry were never far from one another; indeed, as Horses at Work bears out, horses and industrialization complemented the other, each allowing the other to flourish.  The 19th century was a golden age for horses, not in spite of but because of the burgeoning industrial economy.

Horses have been working companions for humans for millennia, for reasons the author details in the beginning of her work, evaluating them against their leading competitors, oxen and camels.   In the 19th century, however, they were successful beyond all prior imagining: never before had there been so many horses, and they were doing everything. Horses didn’t just pull carriages for wealthy aristocrats and up-and-coming merchants:   they tugged canal boats down their courses, and treading engines allowed them to power ferries as well. The same apparatus made horses the prime movers within early industrial technology.  Steam was their ally, not a threatening foe.  Rail lines could cut across distances, linking central points to one another, but they required horses to deliver goods to the consumer.  Horses created early industrial infrastructure and prospered from the opportunities it created, but they were also direct beneficiaries of its output.  The industrial system created a massive and steady supply of constantly-needed horseshoes, for instance, without which horses were at risk for lameness, and new wagons and tackle developed that made their work both less strenuous and more profitable for their owners.  Their growing numbers and economic ubiquity led to an intense amount of study, both in breeding and in science, with equine healthcare increasing in measure.  Eventually steam and horses would both run afoul of electricity, internal combustion, and political movements aimed at “cleaning up” the city, both by clearing out worker housing and getting rid of urban animal residents, The work of overhauling the economy’s circulatory system would take time, however: horse populations peaked in the 1890s, even as electric rail lines, bicycles, and primitive automobiles were appearing, and didn’t fall away significantly until the end of the Roaring Twenties.

Although written and published at nearly the same time as Clay McShane and Joel Tarr’s The Horse in the City,  these two books do not step on one another’s toes too much. Both address the role of horses in industrial America, but Horses at Work examines technical issues more in-depth — the technology used in ferry and mill transmission, the development of stagecoach lines — and features even rarer photographs.  The two books together are a perfect pair for understanding horses’ impact on early industrial America.

Citizen, librarian, reader with a boundless wonder for the world and a curiosity about all the beings inside it.
View all posts by smellincoffee →
This entry was posted in history, Reviews and tagged America, American Civil War, animal domestication, energy, Gilded Age, history, transportation. Bookmark the permalink.

4 Responses to Horses at Work