The Battle of the Atlantic

Posted on November 5, 2015 by smellincoffee 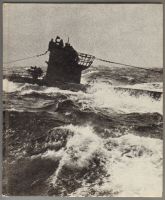 Long before panzers roared through Paris and Stukas littered the fields of France with burned-out machines, the Phony War existed only in name. The months of silence on land in Europe that prevailed between the Allied declaration of war and Hitler’s spring seizure of everything in grabbing distance were loud indeed on the sea — filled with crashing waves as U-boats and raiders  plowed through the waves hunting for supply ships to sink.  So sooner had the war begun than ships inbound to England were being sent to the bottom, and with them precious lives and supplies.  The threat of strangulation by U-boat had imperiled Britain before, during the Great War, but naive trust that future conflicts would abstain from a now verboten weapon  meant Britain’s neck was again on the line. Battle of the Atlantic, part of the Time-Life history of World War 2,  combines full-page spreads and photo essays to deliver a sense of the action and peril at sea, where civilians were military targets and the stakes were never higher for the Allies.

Unlike the Battles of France and Britain, the Battle of the Atlantic stretches out over not weeks or months, but years. Despite catastrophic losses — over half the boats and lives committed by German to the U-boat fleet would be claimed by the sea —  Germany continued producing and sending out submarines against Allied shipping until the very end of the war.  The worst ravages would be over by 1943, but for Britain and her allies, the struggle was uphill. Lessons of the Great War’s  anti-submarine campaigns had to be relearned, and new strategies created as the U-boats came this time not alone, but in radio-coordinated packs.   The convoy system was Britain’s best hope, comprising multiple cargo ships guarded by whatever escorts could be found.  Escorts were not necessarily warships, even aged ones; a fishing trawler equipped with racks for depth charges might qualify for duty.  The U-boat menace could have been even more dire had Hitler committed naval resources to a full undersea fleet, instead of insisting on a ‘balanced’ fleet that involved big and shiny surface ships like the Bismarck, which made for great press but poor strategic weapons.   The Allies also produced new weapons to take down the U-boats, developing shipboard radar that could locate vessels on the surface of the sea, where — despite their name — Unterseebooten spent most of their time.  They also learned to use the U-boats’ frequent radio communication  (vital in coordinating the wolf packs) to triangulate on their position, and began to incorporate airplane patrols to boot.    By the time the German command realized  how advanced British radar had become and began to develop countermeasures,  Germany was waist-deep in Russia and fighting an Allied invasion of Rome. The combination of bitter experience, new tactics, new weapons, and increasingly green and scattered German mariners, broke the wolf packs’ control of the sea.

The Battle of the Atlantic is valuable as a brief overview of the naval war between the Allies and Axis, providing raw data as well as first-hand accounts by both British and German mariners (sometimes from the same battles) to put the reader on the deck of their subjects. There is also a collection of art produced by  sailors who wanted to recreate the scenes burned into their memory, like the despair of huddling lifeboats, watching as their home sinks into the deep. I appreciated the attention given surface ships at the beginning, and the surprising chapter on Caribbean altercations. The data presented is also surprising —  while I knew U-boats patrolled the eastern seaboard of the United States, the amount of tonnage sunk places the seaboard as one of the most perilous places to sail, along with the ‘western approaches’ that paralleled German U-boat bases in France.

Citizen, librarian, reader with a boundless wonder for the world and a curiosity about all the beings inside it.
View all posts by smellincoffee →
This entry was posted in General and tagged art, Britain, Germany, military, naval, submarines and unterseebooten, Time-Life History, WW2. Bookmark the permalink.

3 Responses to The Battle of the Atlantic