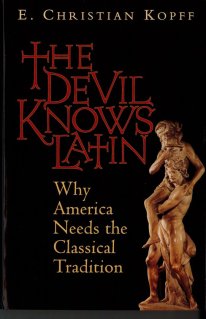 Earlier in the week I read The Devil Knows Latin, which like Who Killed Homer? contends for the value of a classical education to western civilization.  His argument, appropriately enough, is trinitarian; he argues on behalf of tradition itself, argues for the classics’ place as the bedrock of the western tradition, and argues for Latin and Greek’s importance in imbibing the west’s heritage most fully.  Kopf is a partisan of the west who regards attempts at emphasizing multiculturalism in education as dodgy; not because other cultures don’t have value, but because they cannot be appreciated piecemeal.  A cultural tradition is, like a great house or a city, a thing built across the ages by succeeding generations; the work laid down by the dead is used and advanced by the living; each piece connects to the other. One generation of Greeks makes written stories out of another’s myths;  Shakespeare takes those stories and makes them the background for his own; even a ‘modern’  mind like Freud uses Greek mythic language to communicate his ideas. Attempting to teach culture through random stories from across the world would be tantamount to constructing a house by grabbing diverse elements — a Japanese roof, Igloo walls, French doors — and pushing them all together.  It doesn’t work, and nor does modern western education work in presenting children with a slate of wholly seperate subjects without connection to one another. Kopf’s understanding of education is more integral; for him, subjects should be learned together, like Roman schoolboys learning philosophy or history as they translate or read Latin in their mastery of it.

Regrettably, Kopff doesn’t dwell on the Greek worldview the way Hanson does, though a conviction that education is less accumulating facts and more the cultivation of an individual undergrids his perspective.  The book doesn’t have the cohesion its author admires; between an essay on the importance of language and several fascinating pieces of movie and literary criticism lays an argument for protective tariffs.. This is really more a collection of articles, linked by highbrow cultural defense.  If The Devil Knows Latin succeeds, it is in its first argument for culture, specifically the fact that culture is not a thing in itself, with its own life, but something which depends on the living to preserve and build upon.  Russell Kirk made an identical argument in America’s British Culture, where he sweetened the pot by  contending  that  the classical tradition was one that Americans of all ethnicities and religions could use to bind one another together, instead of falling apart in cultural balkanization. Though I’m an ardent lover of the classical tradition, for me The Devil Knows Latin will be more memorable for the movie reviews.  Hanson’s work, which predated this by a year, is much superior.

For the curious:  the title is taken from the story of a bishop who insisted a child be baptized in Latin instead of English, because “the baby doesn’t know English and the Devil knows Latin.”

Related:
Who Killed Homer? The Demise of Classical Education, Victor Davis Hanson
The Roots of American Order and America’s British Culture, Russell Kirk. Both not only include reviews of the west’s classical heritage, but stress the importance of cultural continuity.

Citizen, librarian, reader with a boundless wonder for the world and a curiosity about all the beings inside it.
View all posts by smellincoffee →
This entry was posted in Reviews and tagged classical world, culture, education. Bookmark the permalink.

5 Responses to The Devil Knows Latin