Behind the Mask of Chivalry

Behind the Mask of Chivalry: The Making of the Second Klan
© 1995 Nancy MacLean
336 pages 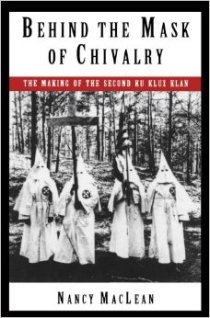 I’m a faithful follower of Brother John Birch,
and I belong to the Antioch Baptist Church
— and I ain’t even got a garage, you can call home and ask my wife!
(“Uneasy Rider”, Charlie Daniels*)

Nancy MacLean’ Behind the Mask of Chivalry examines the Ku Klux Klan at its most insidious: the opening of the 1920s. Using its activity in Athens, Georgia, as a case study, she probes its tactics, its composition,  its worldview, and its impact.   She demonstrates that the Klan’s lingering horror stems not from its penchant for burning homes and whipping people, but that the most respectable castes of society could hide behind its robes. Viewing the Klan essentially as a reactionary, populist socio-political movement, she offers an intriguing comparison between it and the fascist movements in Italy and Germany, which were on the rise as well. Though not a serious rival to The Fiery Cross as far as Klan history goes,   for the reader only interested in the Klan at its modern height, it should serve fairly well.  It has limits, however, in that the author uses the history to scratch an itch against male privilege. This is essentially a feminist history of the Klan that sees a war between the sexes at every turn.

Despite the Klan’s association with ‘white trash’,  more than half of the members of the Athens group were independent business owners, managers, or small freeholders. They were the very stock of citizenry, in fact, including in their ranks mayors and pastors.  While there were a few unskilled workers in the Athens organization, the majority were men of some accomplishment – if nothing else, then masters  at a trade. They were diverse and largely successful, far from being the bitter and dispossessed ex-soldiers of the 1870s who sought revenge against their imagined enemies in the form of “northerners and Negroes”.   Their concerns and fears were diverse, but the Klan would unite them in one simple message:  old-fashioned America was in peril. Its menaces were both economic and social, both real and imagined.  The United States had only entered the Great War for a year, but it would be enough to radically alter the nation: the wartime agricultural boom led to failing farms after Europe began to recover, for instance. Other social consequences of the war were a renewed sense of resistance from black soldiers who discovered there was more to the world than institutional racism, and increasing control by the government of every aspect of life.  This was an age of industrial concentration, of department stores like A&P out-competing smaller firms. Fear of business conspiracies abounded;   with so much capital being controlled by so few hands, takeovers by a corporate elite were a common object of dread. The transformation of society by science, government, and capital had completely outpaced the moderating hand of tradition, leading to drastic changes in social customs.  A family’s move from an agricultural homestead to wage-warning in the city, for instance, disrupted some of the ties that bound children to the care of their parents. Instead of working around the family farm, young people were paid pages that they felt a sense of individual ownership over. Emboldened by this, they explored the new world of the growing city, and all of its temptations — like dance halls and pool clubs.
.
In answer to all this stress and fear came the Klan, assuring parents and citizens that their fears were justified,  that true Americanism was under attack and needed defenders.  This was an age of civic and fraternal organizations, far more active than they are today. The Klan had all of their attractions, plus the costumes and rituals of older societies, and it promised to do something about the problems faced by concerned traditionalists.   Racism is the Klan’s home territory, but MacLean’s research indicates how broadly the Klan’s sheets billowed: over half of the recorded violence done by the Athens klan, for instance, had white targets, and this was from an area  bound to be more racial than most.  The Klan attacked blacks who questioned their subordination under an elite, yes,  but they also attacked men accused of not supporting their wives. They were footsoldiers of Prohibition, leading the fight against  purported moral decay even though their leaders were known to knock a few jugs back. (Hypocrisy seems to be endemic to the human condition.)   The klan functioned on many levels: first, it offered a forum for concerns to be voiced and encouraged;   it knit members together with socials and consumer-based activism, in which Klansmen only patronized the stores of other Klansmen; and, when it occasioned, offered a sanctified use of force to take down those deemed malefactors.   The klan was more than a criminal gang: it was a tribal-civic religion, combining Christianity with racial purity — a rebirth of paganism, almost, with a binary focus on the Tribe and its god, both supported by willing warriors.

The religious aspects of the Klan combined with its embrace of violence invites comparison to the Fascist movements in Europe, which also not only defended tradition against modernity, but combined it with an absolute worship of the Nation and its symbols. MacClean points to the Nazi’s party’s success during periods of economic depression, and and the Klan’s own decline after America recovered from the postwar bust, to suggest that both were  born of and sustained by severe socio-economic stress.   Had the United States endured as long a downturn as Weimar Germany, she muses, the Klan might have well brought fascism to the United States, wrapped in the flag and carrying a cross.  Given their success in the midwest (practically taking over Indiana), that may have been a possibility, but as MacClean notes most Klansmen had a serious ideological animus against dictatorship. Their hatred for the Catholic church, for instance,  fixated on the notion of papal authority.

As useful as MacLean’s work into the Klan’s demographics is, indicating how popular it became by masquerading as a civically-minded fraternal organization,  MacLean’s sexual hangup presents serious baggage.  Not only does she dismiss the entire concept  of honor as one of male ownership over women, but she reduces male bonding rituals to suppressed homosexuality.  Seeing sexual undertones in every relationship is one of the more tiresome aspects of the modern mind, and does not serve this history well. MacLean also seems to place blame on the subjects’ concerns, rather than than their actions:  how dare parents be concerned about their children risking their health and futures in premature sexuality? Bring on the STDs and abortion, baby, it’s time for liberation. She also uniquely targets white men as being the reactionaries, as if their wives (enlisted in a Women of the KKK) or black men didn’t share those concerns about their children’s futures.  Granted, the villains here are white men, but MacLean singles out the concern, the very act of judgement. Moderns don’t like to be judged, but  evaluating events as good or ill or some balance of the two, is how humans exist.

Behind the Mask of Chivalry is serviceable if limited. Its foray into the demographics of the second klan is more extensive than The Fiery Cross, but that work held its own in that respect and offered reams more substance with less editorializing.

* “Uneasy Rider” is a highly entertaining song about a long-haired peacenik wandering into a redneck bar and escaping from a fight by accusing one of his antagonists of being a long-haired hippie, guilty of voting for McGovern and hired by the FBI to infiltrate  the KKK.

Citizen, librarian, reader with a boundless wonder for the world and a curiosity about all the beings inside it.
View all posts by smellincoffee →
This entry was posted in history, Reviews and tagged 1920s, American South, cults and conspiracies, fascism, gangs tribes and parties, history, social change. Bookmark the permalink.