Faith and Treason: The Story of the Gunpowder Plot
© 1997 Antonia Frasier
384 pages 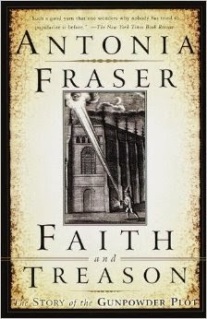 Remember, remember, the Fifth of November, the gunpowder treason and plot….or, as contemporaries called it, the Powder Plot.   Its scale, for the 16th century, was ambitious, especially so for its novelty.  No one-shot assassination, in this scheme at least thirteen conspirators worked together over a course of several months on a plan that would simultaneously involve kidnapping a royal princess and blowing up Parliament – killing, in one fell swoop,  King James, his son the prince,  the royal ministers, and the assembled lords of England. The plan was undone by a mysterious letter, but even its collapse was exciting, featuring explosions and a shootout before legal trials wiped up the last of those involved.  What possessed these men on such a murderous undertaking?  Faith and Treason is an excellent history of the affair, prudent and compassionate. While no one would fault Antonia Frasier for heaping abuse on men who knowingly plotted the death of innocents, who intended to create widespread confusing by massacring the entire government of England and then conspiring with foreign powers to impose order,  she does not. She simply tells the story of what happened with an eye for understanding why, and much of it seems to be misplaced youthful bravado, matched with the Crown’s longstanding persecution of religious minorities and the crushed hope of James’ about-face from earlier tolerance. The tale is a tragedy, not only for the misguided aims of these men who were foolish enough to think anything good could come of obliterating a nation’s entire corpus of leadership, but because it backfired. Despite the urging of the Pope for English Catholics to live in peaceful hope, despite  the general lack of restiveness among their populace, and despite the fact that the closest potential European allies (Isabella and Albert) had little interest in meddling in English affairs, the conspiracy persisted. In its wake, Catholicism bore the taint of treason, and would suffer it for two centuries more.   Fraser’s history is remarkable for its lack of vitriol, and thorough depiction of how the plan came together piece by piece, man by man, and then abruptly fell apart.

Citizen, librarian, reader with a boundless wonder for the world and a curiosity about all the beings inside it.
View all posts by smellincoffee →
This entry was posted in Reviews, Uncategorized and tagged Britain, Catholicism, history, Stuart England. Bookmark the permalink.

2 Responses to Faith and Treason