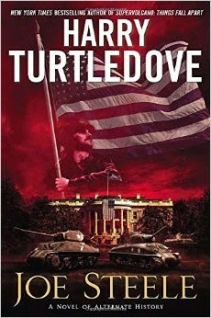 What if Joseph Stalin was a Democrat? Imagine that the Man of Steel’s parents had emigrated to the United States before he was born, and that instead of rising to power through a Bolshevik revolution, he was voted into high office. In Joe Steele, Stalin wins the 1932 Democratic presidential nomination after his rival FDR perishes in a mysterious fire; after trouncing Hoover in the general elections, he immediately adds the United States to the 1930s’ diverse list of totalitarian hellholes, complete with labor camps and knocks at midnight from men in black.  The sheer magic of being Joseph Stalin is irresistible…and inexplicable.
Joe Steeleis a strange creature; for most of the book, history unfolds as it did in our own time,  despite the fact that Leon Trotsky reigns in Russia instead of good ol’ uncle Joe.  In the United States, Stalin uses the desperation of the Depression to justify four-year programs that are a staggering departure from American governance. He opens his hundred days by nationalizing the banks,  and from the public is uttered not a peep. When the Supreme Court stirs itself to point out that there are no Constitutional grounds whatsoever for the president to take over the banks,  Stalin has his new buddy J. Edgar Hoover arrest  those justices deemed obstructive. Who exactly has the authority to issue an arrest warrant for the Supreme Court?   The staggering implausibility of this is matched only by the fact that all four immediately confess to conspiring with Hitler to undermine the president’s glorious revival of the American enterprise. Stalin’s ability to force people to do exactly what he wants continues throughout the book, and it is never once believable. He is as charismatic as a potato, and while one man can be blackmailed, how can an entire Congress?  And there are precious few consequences for these actions;  aside from the people being thrown into labor camps to cut down trees or dig ditches, the Depression and the War go on as history ordained. This, despite the people like Douglas MacArthur who are lost in military purges.  Men of consequence are being introduced and felled, but history’s course is largely unchanged. Stalin even runs against the same exact people that FDR did.  Only in the last hundred pages does history take an interesting turn when Stalin is forced to invade the Home Islands of Japan. Otherwise, it’s WW2 as usual with the President being really mean.
Turtledove’s books are character driven, allowing readers to soak in an alternative history as the viewpoints live it.  Unfortunately for Joe Steele, there are all of three characters of importance here: a reporter turned political prisoner, the reporter’s presidential speechwriter brother, who seems to drink bourbon every time he is introduced, and Joe himself.  The problem with Joe is that he doesn’t make sense. He has a personal vendetta against Leon Trotsky for….no reason at all.  Joe was born in California; he has as much reason to loathe Trotsky as I do the mayor of Tokyo. His politics are limited to “let me do stuff”:  he despises Communists despite running to help the downtrodden working masses against the evil rich, but makes no reference to any other worldview. Turtledove never even mentions political movements that Joe could have had connections to — no wobblies, no Grange, no nothin’. The only explanation for his being here, the only explanation for him getting away with anything at all, is that Turtledove really wants an American Stalin. But…Joe Steele isn’t.  He has no discernible ties to the American culture he is introduced as a member of. He’s Stalin with a different name, albeit with slightly moderated sociopathy. Quoting founding fathers and hating Soviets doesn’t make a man American, and suspension of disbelief never gets off the ground here. .
This may have made for a diverting short story, but it hasn’t scaled up well. Harry can coax out an authentically American tyranny; he did it somewhat in the Timeline-191 series.  Size shouldn’t a problem: Joe Steele is larger than The Plot Against America and It Can’t Happen Here, both of which introduced a fascist USA concept. Unless the reader is supremely interested in Stalin,  this book falls flat:   there is no agonizing but sophisticated remolding of the American politics to fit a tyrannical vision, and what significant departures there are don’t arrive until late. Even then, there’s no weight to them, because our characters are after-the-fact observers only.  It doesn’t help matters that there are entire scenes in which nothing at all happens: in one, Charlie walks into Joe’s office, congratulates him on  reelection, and then wanders away. Turtledove is as he is, though, a reliable producer of diverting premises and partially-assembled stories. So what if Joe Stalin were president? He might not kill twenty million people. He might just settle for executing the few thousand who annoyed him.   And that, dear readers, is about as far as it goes.

Citizen, librarian, reader with a boundless wonder for the world and a curiosity about all the beings inside it.
View all posts by smellincoffee →
This entry was posted in Reviews, Uncategorized and tagged alt-history, Harry Turtledove, WW2. Bookmark the permalink.