Posted on October 9, 2014 by smellincoffee

Seeing like a State: How Certain Schemes to Improve the Human Condition have Failed
© 1999 James Scott
464 pages 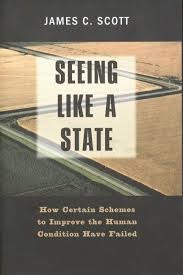 Seeing like a State scrutinizes the organizational approach of state governments and other large institutions from the Renaissance era onward. In essence ,James C. Scott demonstrates how reductionist top down attempts at understanding and planning tend to be.  In attempting to render comprehensible complex systems – whether those systems are forests, cities, or national economies – vital information is lost.  Scott argues that the greatest value of aggressive organization is to increase the power and control of the organizer; this is in fact the pointof organization in most cases, as with mandating last names. In  other cases, like the creation of forest management, power is achieved more indirectly through the state consolidating and advancing its economic agenda.  In reducing forest farming to one species, however, and planning it rigidly, the rich variety that makes a successful forest thrive is lost. The farm becomes susceptible to vigorous disease; monoculture produces the same results everywhere. The order imposed is accomplished at the cost of life; cities disintegrate when their rich diversity is broken up, rigidly segregated with zoning laws, and lumped together in sprawling clumps. Reviewing dying forests, moribund cities, and nations with collapsed collectivist economies,  Scott argues for decentralized approaches that allow practical, experiential knowledge — metis — to predominant, instead of abstract, general knowledge, or techne.  The difference between them can be found in ecologically savvy farming of the kind practiced by Joel Salatin, who instead of imposing a system of agriculture on farms he is invited to steward, fleshes one out on an individual site basis, figuring out which natural cycles can be recreated. This decentralized approach works well with cities and farms, which are complex enough to defy successful planning from on high;  it is hard to imagine a revival of manufacturing lead by artisans instead of industrialists, however.  Scott’s case leaves no doubt that organization leads to greater power for the organizers,  but is it avoidable?

Citizen, librarian, reader with a boundless wonder for the world and a curiosity about all the beings inside it.
View all posts by smellincoffee →
This entry was posted in Politics and Civic Interest, Reviews, Society and Culture and tagged cities, farming, Man vs State, organic, politics, Politics-CivicInterest, social criticism, Society and Culture, technology, Technology and Society. Bookmark the permalink.