The Age of Steam 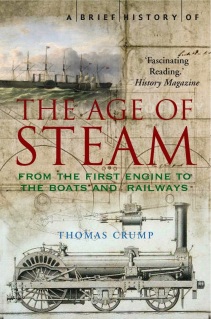 For most of human history, transportation over land has been prohibitively expensive, limited to highly lucrative goods like silk. Trade grew from the rivers, as did civilization. But in the 18th and 19th century, the advent of industrial technologies, often utilizing steam,  radically transformed society. Not only did wood- and coal-fired engines free factories from the need to locate  beside rivers that powered watermills, but the advent of steam transportation knit cities across the landscape together, creating boundless opportunities for economic expansion. A Brief History of the Age of Steam focuses mostly on steam transportation,  first on boats and then on the rails.  Not surprisingly for an author who also penned A Brief History of Science, it places a lot of emphasis on technical details, like the mechanical workings of the steam engine.  As a rail history, it doesn’t compare well to Christian Wolmar’s work, since he incorporates both social and technical aspects, but it’s a rare history of river steamboats and the rise of oceanic steamers.  A strong point is the close relationship between railroads and imperialism, which he develops.  Even though the writing focuses more on mechanical operations than the human element, the history reads well.  I’m still on the lookout for a naval history of steam transport, however.
F

Citizen, librarian, reader with a boundless wonder for the world and a curiosity about all the beings inside it.
View all posts by smellincoffee →
This entry was posted in history, Reviews and tagged history, naval, rivers, shipping, technology, Technology and Society, trains, transportation. Bookmark the permalink.

4 Responses to The Age of Steam