This week at the library: sheikhs, airplanes, and VW vans

This past Thursday, some friends drove me three hours into the woods, dropped me off in the midst of some 70 strangers, and left me there. They called it “Cursillo”, and it was a spiritual retreat which I liked enormously more than I would have ever predicted.  It helped that no electronic devices of any kind were allowed, so I enjoyed four days of conversations uninterrupted by phones ringing or people gazing at their gadgets.  But that’s where I’ve been — physically, all last weekend, and mentally, most of this week. 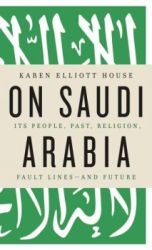 Before I left, I read On Saudi Arabia by Karen Elliot House, an exploration of Saudi Arabia’s culture, history, and political atmosphere. The nation is one worth learning about: home to the world’s largest petroleum and natural gas reserves, and a hotbed of religious violence which is simultaneously cozy with the United States despite being abusively backward in most respects. The Saudi Arabia that House unveils is one rife with contradictions and tensions, many of which are sourced in the Saudi royal family’s machinations to maintain control. They constantly strengthen and attack the warring factions inside the realm for their own advantage:  supporting and promoting Wahhabism across the world, for instance, but then swiftly attacking its adherents if their actions hurt the king or his standing in the world.  Although the Saudi family would like to  be more traditionalist, not only to pacify the swelling ranks of sectarian crazies, but to increase its own power, it is forced by reality to make changes — to allow more opportunities for women, for instance, and be more open to criticism. The Internet is a djinn in a bottle, that undermines the complete authority the Saudi  family and religious leaders once had.  Saudi Arabia is bound to change, but it’s in for a troublesome future.  There’s a great line in The Dark Knight Rises — “Victory has defeated you!” —  Saudi Arabia exemplifies the idea. It is a nation utterly ruined by its prosperity:  the rulers are corrupt, the people are spoiled (not working, not wanting to do anything useful, but eager to rage against the kingdom for not giving them more), and the economy is based entirely on oil, the production of which in Saudi Arabia may have already peaked. On Saudi Arabia is definitely worth looking at if you have an interest in global affairs and politics. 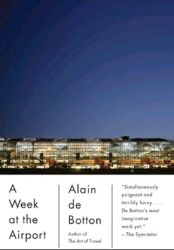 I also read Alain de Botton’s A Week at the Airport, inspired by his living in a hotel attached to Heathrow Airport, where he spent his days and evenings watching people as they set forth on globetrotting adventures, or returned home from the same. Although my interest in transportation might have piqued my interest in this book, its authorship made reading it inevitable. de Botton enthralls me, finding philosophical meaning in seemingly everything. I would not be surprised to learn he had once stood in the midst of a downpour, contemplating his umbrella. He makes the mundane sublime. Witness his shopping approach in an airport bookstore:

“I explained — with the excessive exposition of a man spending a lonely week at the airport — that I was looking for the sort of books in which a genial voice expresses emotions that the reader has long felt but never before really understood; those that convey the secret, everyday things that society at large prefers to leave unsaid; those that make one feel somehow less alone and strange.
Manishankar wondered if I might like a magazine instead.”

In A Week at the Airport‘s scant 100-odd pages,  de Botton muses on travel, the meaning of airport food, the inevitable expectation of arriving passengers that someone will be there waiting for them, the poetry of airline food menus, our faith in technology, other miscellany. de Botton fascinates, and the photography is stirring. 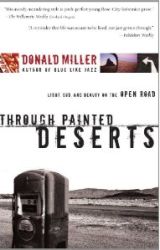 Earlier this past week, I also read Through Painted Deserts, the story of of two men’s journey together from Texas to Oregon in a VW bus, in which they descend into the Grand Canyon and ruminate on the Meaning of It All under the stars. I’ve read Miller before; he penned  Blue Like Jazz: Nonreligious Thoughts on Christian Spirituality, which left me feeling conflicted. As much as I liked Miller’s conversational tone and mellow thoughtfulness, I cringed there as he continued to hit himself over the head with dogma. One of the more intriguing episodes mentioned there, his living in the woods for a few weeks,  is explored in Through Painted Deserts in more detail.  The trip takes place earlier in his life, when Miller was still a young man trying to find himself — and he finds, on the road, that possessions and social status and all that are like, lame, man.  Through Painted Deserts alternates between low-key ramblings on life and intense summations of belief as Miller gets into simple living, mystic musings centered on the natural world, and confessions of love when he and his road-buddy aren’t fixing the van and enjoying the kindness of strangers.  I found it all rather endearing. A related work would be Desert Solitaire by Edward Abbey.

Citizen, librarian, reader with a boundless wonder for the world and a curiosity about all the beings inside it.
View all posts by smellincoffee →
This entry was posted in Reviews and tagged Alain de Botton, Arabia, cultural exploration, philosophy, politics, Politics-CivicInterest, travel, week in review. Bookmark the permalink.

2 Responses to This week at the library: sheikhs, airplanes, and VW vans